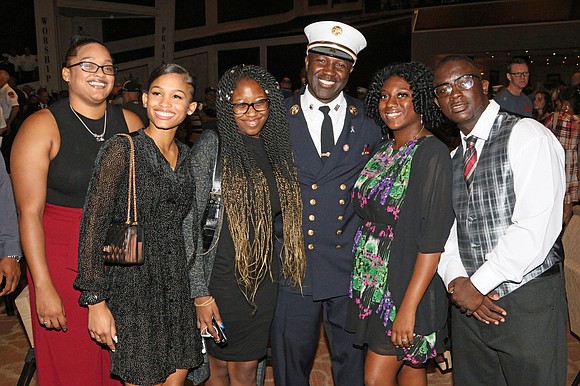 The ceremony took place at the Christian Cultural Center in Brooklyn.

Regina Wilson of the FDNY said, “This promotion brings great pride to the people of color who serve in the department. Unfortunately, due to the lack of diversity in the department Chief Moore is only one of two African American chiefs on the Fire Suppression side. This is one of the reasons the promotion in rank is so important to other members of color in the FDNY and future members to join the Fire Department, and the community.”

The need for an increase of racially diverse firefighters grew out of a federal class action discrimination lawsuit filed by the Vulcan Society, the association of Black firefighters of the FDNY. The lawsuit asserted that the FDNY practiced discriminatory hiring practices. After a span of seven years in court, Mayor Bill de Blasio settled the case for $98 million dollars, and new hiring practices and reforms were ushered in since all these changes took place. Record numbers of African Americans, Hispanics, Asian and female firefighters have been able to join the FDNY firefighter ranks. The number of African American members has risen from 3% to almost 9%.

The organization Fire Inspectors and Civilians of the FDNY helps to recruit, train and mentor people who decide to join the FDNY. The organization also serves the community with fire safety education. The Vulcan Society won a racial justice lawsuit against the FDNY last year and have been harbingers of ushering in diversity and inclusion within the department’s ranks.