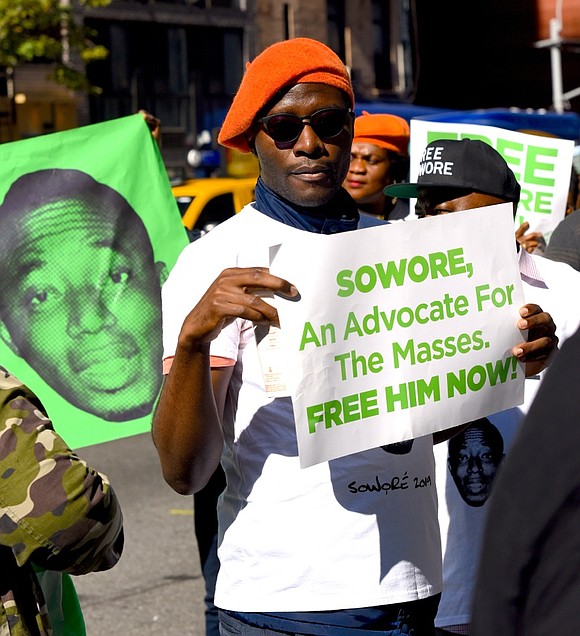 His August 3rd arrest in Lagos, by the Department of State Services, took place two days before his scheduled peaceful protest (also known as Revolution Now) in Nigeria against President Mohammadu Buhari. Sowore is charging that Buhari’s government shows a lack of care on the current issues going on in the country. “They came, kidnapped him at night and for days we did not know where he was. After a week we heard from the DSS that he is in their custody,” protest participant Omotayo Akinde Zobotiano told the , outside the Nigerian Consulate on Second Avenue.

Zobotiano said that he is a student of Sowore and has known him for almost 20 years since both attended the University of Lagos in Nigeria.

The activist, who was very vocal at the parade, added that uproar increased when Sowore went to court and they said that they were going to keep him for 45 days. However, 45 days passed with him still in custody. “The court said that he should go on bail, but the DSS charged Sowore again for treason, insulting the president of Nigeria and other bizarre charges that you could not even think of,” said Zobotiano.

While parade goers chanted “Up Nigeria!” in the background, undeterred Zobotiano went on to describe Buhari’s government as tyrannical and as big on censoring people who speak against the regime, opponents will be locked up as a consequence. “Sowore has been fighting for demands of good roads, good hospitals, good water and good conditions of life for Nigerians. That’s what he’s fighting for.”

Sowore is the founder of SaharaReporters.com, a New York City-based online news site that encourages investigative citizen journalism, and the exposing of misconduct and criminal acts ranging from political to everyday issues in Nigeria. “Over the years Sowore has been fighting the military starting from back then, and he has also been fighting against the corruption in Nigeria through his media which is Sahara Reporters,” said Zobotiano. “He is also not a stranger to arrests or torture for fighting the regime.” “Locking him up is a direct affront to Nigerians in the diaspora, especially because Sowore is a Nigerian in the diaspora who went back to Nigeria and has been very vocal on trying to change things in Nigeria,” said Charles Busari, one of the men in support of the release of Sowore. “A lot of Nigerians in the diaspora have aspirations to go back and to get involved in politics ...so by locking up someone like Sowore, it instills fear in other Nigerians here that have the same aspirations. So we can’t just allow things like this to go without protesting and vocalizing our own concerns.”

Busari believes that overriding the court order by the DSS is unacceptable and shows the fragments in the Nigerian system where the executive overpowers all other branches, terminating the true meaning of democracy.

“If the court has stepped in and said release him on bail then he needs to be released.”