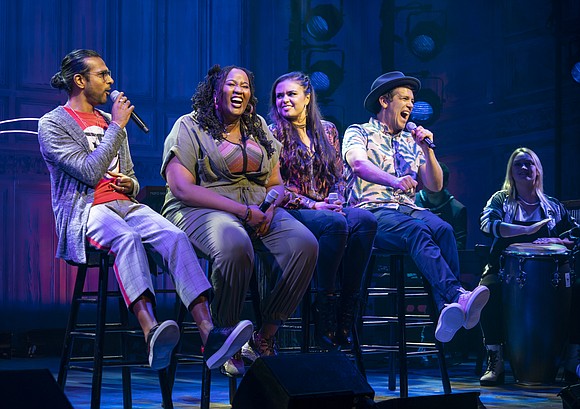 If you get there early, you get to write a word on a piece of paper that is put into a bag. “Freestyle Love Supreme” was the brainchild of Anthony Veneziale, who is also the co-creator of the show with Thomas Kail and a name that may sound a bit familiar—Lin-Manuel Miranda. Kail is also the show’s director. Now having the idea and creating the show is not where Veneziale stops, he also stars in the show as AKA Two Touch with other members of “Freestyle Love Supreme,” which include Utkarsh Ambudkar AKA UTK the Inc; Andrew Bancroft AKA Jelly Donut; Anessa Folds AKA Young Nees; Arthur Lewis AKA Arthur the Geniuses; Chris Sullivan AKA Shockwave; and Kaila Mullady AKA Kaiser Roze.

The show is 80 minutes of hilarious improv. Again, you provide the words, you set the mood and the tone and let these talented thespians create the magic. Every performance has guests surprise actors who come and participate in the improv; at the performance I attended it was Wayne Brady and Daveed Diggs. What an evening it was! Every moment was fresh, new and ingenious.

Now, I know that most people are used to going to a show with a set storyline, dialogue and vibe. But imagine how exciting it is to be in the theater and from the time those actors come out on the stage, you set the storyline, dialogue and vibe. You hear people spontaneously come up with comedy at the flick of the tongue and laugh until you are bent over. That’s definitely what I and the standing room audience did on Friday evening.

The cast did skits and songs from words shouted out like “surrender.” When someone shouted “grace,” the cast shared moving stories about people in their lives that embodied grace. When asked for someone to tell about their day, a woman named Polly was picked, a tourist who just went shopping at high-end stores and restaurants and then came to the show. The cast were phenomenally funny when they took on her story, as they were when an older woman named Barbara shared that at the age of 18 a man took her picture without her permission and her face ended up on someone else’s body in an edition of Playboy Magazine, which her fiancé saw, so you can’t imagine how ridiculously funny that one was.

You’ve got to make plans to see “Freestyle Love Supreme.”