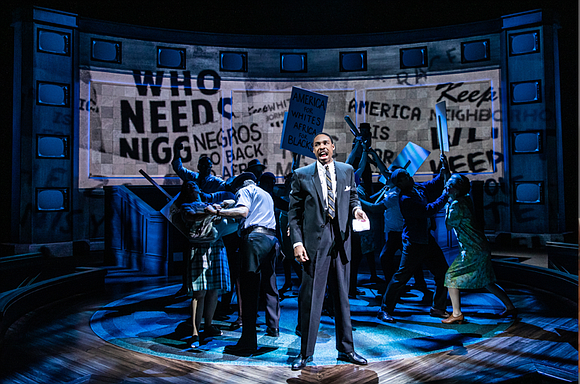 “The Great Society” is a theatrical triumph! Written by Robert Schenkkan, and playing at the Vivian Beaumont Theater at Lincoln Center, it has a captivating, historical story that shows us all the conflicts that went on with President Lyndon B. Johnson (LBJ) during his administration and Dr. Martin Luther King Jr., Black people trying to get voting rights, and Senator Bobby Kennedy. You learn that LBJ was a simple Texas boy who struggled growing up in poverty and genuinely cared about the poor. He was a man with a great deal of humanity, but he was also surrounded by people such as J. Edgar Hoover, director of the FBI, who were not his friends.

Watching this action-packed play you get a very small taste of the power, responsibility and worries that come with being president of the United States. You realize the deep sense of empathy that Johnson had for the troops and the families of the troops he sent to fight and die in the Vietnam War. You also see how ugly a business war is and you see political corruption and racial hatred at one of its high points in this country’s history, especially when it came to Gov. George Wallace in Alabama and Bloody Sunday and Mayor Richard Daley in Chicago and the poor living and educational conditions that Blacks faced.

This blockbuster production, brilliantly directed by Bill Rauch, lets the audience get to know LBJ and see that when it came to politics he could be a very clever man to get what he wanted. He also had a good relationship with Vice President Hubert Humphrey. I love the balanced way that this play is presented and how the racially mixed cast, who play members of Johnson’s cabinet and the leadership members of the Civil Rights Movement, get equal moments to tell their stories. This marvelous play tells the history of this country, sharing pivotal moments and background stories for tragedies such as the murder of Jimmy Lee Jackson, a civil rights activist, and how his death inspired the Selma-to-Montgomery marches. You also get to see LBJ and Lady Bird Johnson and the interactions between them. This production covers a vast number of important historical topics and helps you to see the timeline and relive the drama that was daily fare back in the 1960s in this country.