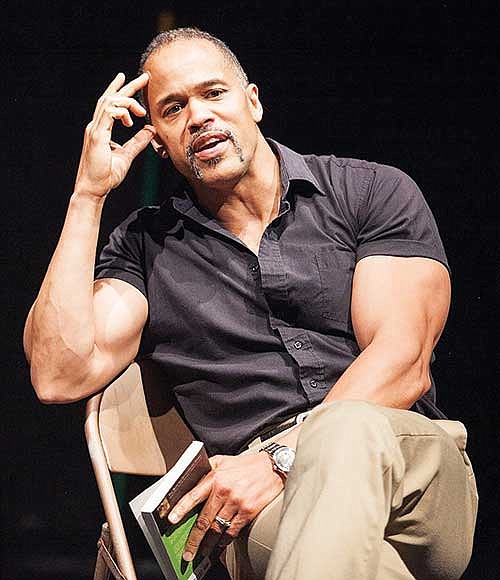 Keith Hamilton Cobb is a superb actor and the star and writer of “American Moor” which recently ran at the Cherry Lane Theatre at 38 Commerce Street.

I had the chance to sit down with Cobb in the Theatre and we talked about his career and “American Moor.” A Q&A follows.

AmNews: How long have you been an actor?

AmNews: Why was it important to you to create American Moor?

KHC: This developing piece of work started seven years ago and I had been an actor for 30 years already. I had a strong understanding of myself as an African American male and a strong understanding of myself as an actor. But I didn’t really have a sense of where the two met in terms of the culture’s perception and the industry’s perception of me. The American Theatre industry prides itself on being liberal and leaning left, but the culture at large is filled with implicit bias and racism. You can’t walk into creative situations and expect all that stuff to be left at the door, it permeates everything we do. There was a particular audition that I went to where it became clear that there was no separating myself as an African American male and myself as an African American actor. The fact that I am Black is going to play a part in the work that I do creatively, who I work for, how I am directed, what roles I get, how I am allowed to express myself in my work, even in the process of getting the work, to what extent my creative ideas and abilities matter. I wrote the play in a day and a half, but then there were a lot of rewrites. At each place it changed just a little bit, until we got here.

AmNews: There is an irony about the play because it’s talking about how difficult it is for Black actors to be given the opportunity to do lead Shakespearean roles, but then you are doing it in the play, what do you want the audience to realize on a deeper level?

KHC: The myriad of ironies in this play go quite deep. There is no difficulty in casting brown people in our creative theater endeavors in this country, there’s a lack of desire. It isn’t hard, it’s just they don’t want to do it. It is an implicit sense that is in them. So, the roles particularly in Shakespeare are quite limited. There are ways to write it off if they say we need a particular star. An actor like me finds this work in school and develops an affinity for it. There are many roles in Shakespeare and many ways to do them. Our people could step up and do it… Shakespeare is about language and I love the language. I look for the language in all the work and roles I’ve played even in the TV work that I have done… So much beauty, so much art is in the music.

AmNews: Why is a play like this so appropriate in our society today?

KHC: While we as a culture are spending all this time focusing on violence against Black bodies, we look at white supremacy and it poses this picture of clansmen and lynching. Yes, that is present, so it’s hard for that not to be the focus. But violence against Brown people in general takes on many forms. We talk about micro-aggressions, just complete dismissal of the African American experience. This play is about the forms of racism and supremacy, but for the people upon whom it’s perpetrated, it’s not just that Black lives matter, it’s that Black ideas matter. It’s that Black art and creativity matters and I focus on that because I think that that’s what could change. I fell in love with theater as a vehicle to change cultures, to nourish, grow and evolve cultures and when it’s done in good faith it can do that. When it’s all about currency and money, let’s keep it light and entertaining—it doesn’t help us grow. This was meant to be funny, but there’s a point to stop laughing and say these are the issues we have to navigate and we have to do it together—it has to be us. I think in telling that story and telling it well that people across every race and age see that it is about us.

AmNews: How does an actor as talented as you are deal with rejection/what is the secret to be able to go on?

KHC: As an actor you are taught that there’s going to be rejection. You have to develop a mechanism to deal with that. That’s not a whole lot different than developing mechanisms to deal with bias in your life as a Black person. You realize things are going to be different for you. If you’re going to go into rooms as an actor and get said no to again and again, you have to first love yourself so that you can say yes to yourself. I was able to do that. But, seven years ago when I went on an audition there was huge rejection and rudeness in the audition process and I was inconsolable. I couldn’t put it down, I was 50 years old and I couldn’t understand why I was being treated this way. I go on because I always tell young actors in general, if there is anything else that you could do, do it, because this shit is hard and it will eat your life. For me, I didn’t have a choice; that was the direction that I needed to go. So, I said what are you going to do, you get up in the morning and you create, you’re an artist. I have to do what I was put here to do. I have purpose in this life. I can look back at the hardship and realize it enabled me to write this play. I love to be on stage and I love to move people.

AmNews: In the play you seem to have a love/hate relationship with Othello because he is the only lead Shakespearean character that is created for a Black man, explain that.

KHC: There are a great many problems with the way that Shakespeare has written that play and portrays that character. It is not the fault of Shakespeare that this is so. I have no right to indict a 400-year-old play. It’s when you hand it to me and say be this guy. The love/hate relationship comes in when people say you are perfect for this guy and the question is the guy who is written or the way I wish to portray him? And the answer all too often in this inadvertent bias is, as written, but then how would they know what Shakespeare meant?

AmNews: Is there anything we didn’t talk about that you want to touch upon?

KHC: I want to talk about the language. We did a theater conference in Denver several years ago and theater students were moved by the piece. It was done on a bare stage, with a little lighting, the director was not physically in the theater, he was just a voice. I expected them to respond to what the audiences are responding to here and they didn’t. They said we are here, we audition for “Oklahoma,” or “South Pacific,” a bunch of us get in, they dress us up, they light us, we have a great set. It’s all about that and there’s competition to get the roles, but it’s about the big picture. And then we see this and we realize that theater is about a guy with a story on stage telling the truth—no set, no special costume, just a dude. The drama is in him standing there telling the truth and I was gratified to hear that and when I talk about my job in theater and to perpetuate the piece, I’m hoping that I can influence more young theater people to see this piece from that place and know that if they have a story to make theater, they can start in their living room. You really just need the story and to be able to synthesize the experience, to me that comes in language. I’m really moved by the language of all the work I do… If the language of a play transports you, that’s all you need. I want to be able to stay with that in my work.