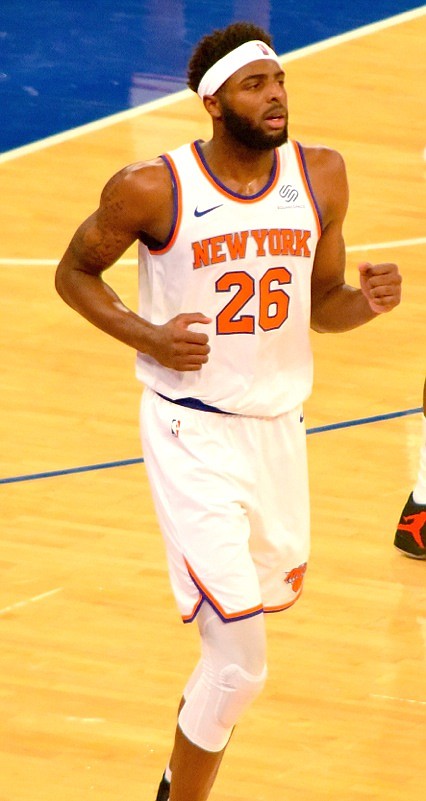 The Knicks opened their season—albeit preseason—on Monday with a 104-99 win against the Washington Wizards on the road. It was the first step in the team establishing a clear identity that was glaringly lacking last season. They played their second game of the preseason last night against the Atlanta Hawks and play their first game at Madison Square Garden tomorrow in a rematch with the Wizards.

Veteran forward Marcus Morris, who the Knicks signed to a one-year contract in July, took the lead in proclaiming the Knicks wouldn’t be pushovers after getting ejected in the third quarter for bouncing the basketball off of the head of the Wizards’ Justin Anderson. The Wizards forward was guarding Morris tightly before getting the Harlem Globetrotter treatment.


“If it was the regular season, I wouldn’t have done it,” Morris rationalized. “My team needs me, I’ve got to be smarter and set a better example. But like I said in the beginning, we’re not taking no s--t. It is what it is.”

Morris is part of the Knicks’ roster overhaul after they were 17-65 a season ago, the worst record in the NBA. The 30-year-old Philadelphia native and twin brother of Markieff, a forward for the Detroit Pistons, averaged 13.9 points, 6.1 rebounds for the Boston Celtics last season and has career averages of 11.5 and 4.6. Most significantly, he has been in the playoffs the past three seasons. Conversely, the Knicks’ last postseason appearance was in 2013.

It is imperative the Knicks build a strong foundation and brand that is appealing to the league’s top talent. Those are two characteristics of which they have been devoid for the last decade and the primary reason the franchise has failed to lure the NBA’s best free-agents.

Kevin Durant, who was a main target of the Knicks during this past summer’s free-agency period, affirmed as much in an in-studio interview with radio station Hot 97 in Manhattan on Tuesday.

“I think a lot of fans look at the Knicks as a brand and expect these younger players who, in their lifetime, don’t remember the Knicks being good,” said Durant, who ultimately signed with the Brooklyn Nets along with Kyrie Irving.

“I’ve seen the Knicks in the Finals, but kids coming up after me didn’t see that. So that whole brand of the Knicks is not as cool as let’s say the Golden State Warriors or even the Lakers or the Nets now.”

What will change that perception is the development of young, exciting talent, reliable, productive, veterans and getting back into the playoffs. All three remain to be seen.