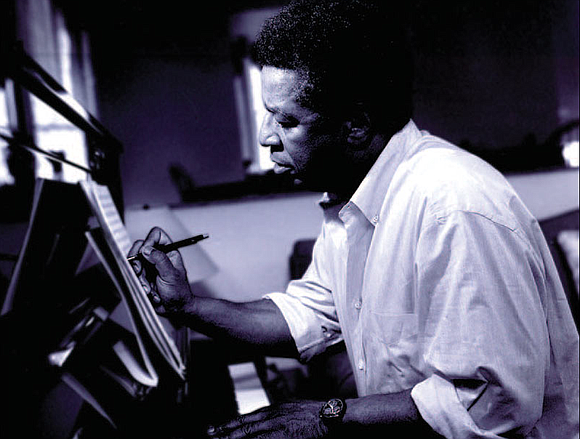 Alvin Singleton was a kid with access in the midtwentieth century close-knit Bedford Stuyvesant neighborhood of his childhood. “Where I grew up,” he explains in an interview with Amsterdam News, “there were a lot of jazz musicians. I had friends in their families so I used to go to their rehearsals.” That informal exposure became the foundation for what became Alvin Singleton’s international career as an award-winning musical composer.

He studied music composition at New York University and Yale University and was a Fulbright Scholar in Rome. After returning to the U.S., after living in Europe for almost 15 years, he was Composer-in-Residence with the Atlanta Symphony, Detroit Symphony, Ritz Chamber Players and Spelman College. Singleton still spends much of his time in Atlanta.

Momenta Quartet will premiere Singleton’s Chamber Music America-commissioned piece “Hallelujah Anyhow” at Americas Society in New York City on Oct. 15. It will be part of the fifth annual Momenta Festival, a series of four concerts with diverse programs curated by the members of Momenta Quartet. Admission is free, but reservations are strongly recommended.

Singleton’s parents also played a significant role in his decision to become a musician. “They made me learn an instrument and I chose piano. Eventually, I learned to play jazz.” Singleton’s experience with jazz led to an interest in composing music. He enrolled in the New York College of Music (now part of NYU) where he began studying music composition. “I didn’t really categorize myself. I had begun listening to classical pieces and I knew there were a lot of Black composers.” Singleton joined the Society of Black Composers, which further fueled his fascination.

Singleton demurs when described as a composer of classical music. “I know that I write music. I’m a composer. So, categorization always gets us in trouble because it defines us very narrowly.”

When asked to describe “Hallelujah Anyhow,” he is characteristically reluctant to do so. “When people ask me about the titles for my pieces, I always say titles are for identification, not explanation. To know the music, you have to listen to it.”

The process of composing “Hallelujah Anyhow” was unexpectedly interrupted by a health scare. Singleton shares, “This piece took quite a long time,” he says, “because I had to have heart bypass surgery last year. It came out of nowhere because I didn’t have a heart attack or anything, I just had a blockage.”

He will, however, share his thoughts on some of his works that are relatively special to him. He has admitted that his “After Fallen Crumbs” was dedicated to Martin Luther King Jr. due to King’s focus on helping

The prolific Singleton will also share that he is particularly proud of “Shadows,” which he wrote for orchestra. “When I go back and examine it I see ideas that I was using that I didn’t realize at the moment. When I go over early music, I see ideas that aren’t fully developed because I was still developing. The more I write, the more I mature. In fact, I’m still developing even at this age.”

Perhaps because of his special connection to “Shadows,” Singleton has ventured to describe it in a past interview as, “An idea based upon different-sized spinning tops, each having its own little melody, and they intersect and shadow one another as the work develops.”

The general acknowledgment that Black American culture is an integral part of U.S. culture itself is something Singleton is excited about. In part borne out by recent developments such as the announcement by The Met that it will present Terence Blanchard’s opera based on New York Times columnist Charles Blow’s memoirs “Fire Shut Up In My Bones,” the first time in the storied institution’s history that it will present an opera by a Black composer. The libretto is by writer and filmmaker Kasi Lemmons (“Eve’s Bayou”). “I think it’s about time, first of all,” Singleton says. “Secondly, it’s about the music. There are plenty of Black composers writing really good music but they don’t get the opportunity to be invited to be composers. Slowly but surely Black culture is being recognized as true American culture. I can’t imagine this country without Black people.”