A spin on spinach 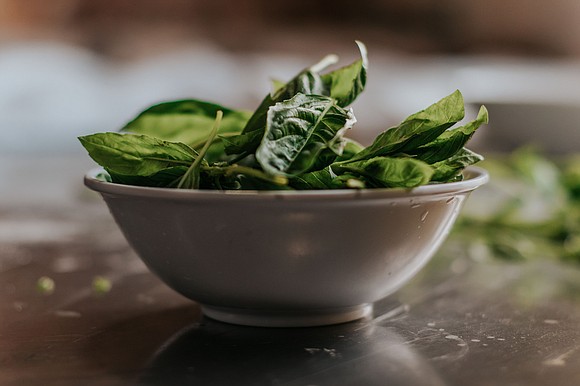 Spinach is one of those leafy vegetables that is filled with vitamins and minerals which protect the heart by reducing heart attacks; it fights cancer and gives longevity to healthy eyes. Spinach is loaded with vitamin C, magnesium, calcium, vitamin B-6, folic acid and iron. The importance of vitamin B-6 and folic acid is that it lowers the compound homocysteine which causes heart attacks and strokes. Spinach keeps muscles in tune and bones strong due to its high concentration of calcium, magnesium and potassium.

An important vitamin, beta carotene is found concentrated in spinach. This vitamin is known as a free radical absorber which prevents the production of cancerous cells. Healthy eyes depend also upon beta carotene and lutein found abundantly in spinach.

Spinach grows close to the ground and the deep grooves in the leaves contain a great deal of dirt, sand and fertilizers. Fertilizers are used to ensure healthy green leaves. The fertilizers consist of herbicides, fungicides and insect repellents. It is obvious that spinach must be washed thoroughly to ensure a healthy edible product. In many of the farms today they are growing organic spinach which is not subjected to these poisons. Instead, farmers are using cow manure. This waste product of animals in many cases may contain the bacteria E. coli which is found in the gastrointestinal tract of the animal. If the bacteria is not eliminated by a through washing of the spinach leaves, it can survive to cause food poisoning. If spinach is handled by hands that have not been washed after a bowel movement, the germ can contaminate the product. Often, when spinach is being harvested, contaminated hands from fecal material can be transferred to the spinach.

When one is infected with E. coli, it causes nausea, vomiting and diarrhea. The bacteria produces a toxin that causes these symptoms. The mere washing of the spinach often does not eliminate the toxin. It is important when losing a lot of fluid from the body to replace it with electrolytes found in products such as Gatorade and salty chicken broth. Diarrhea will respond to over-the-counter products such as Imodium. When excessive fluids are lost, however, a person may need further fluid replacement which may require hospitalization to prevent kidney failure.

Oh—by the way—Popeye stayed healthy also because he loved his girlfriend Olive Oyl. As you know, virgin olive oil will keep your cholesterol in check by preventing heart attacks.

Finally, when cooking spinach, it is important to conserve the minerals and nutrients by the following method. Add spinach to one cup of boiling water, cover it and let it cook no longer than five minutes. After draining, season to taste with olive oil and fresh garlic. A pinch of salt can be added if desired.

With safety precautions, spinach will still remain one of our healthiest green leafy vegetables.