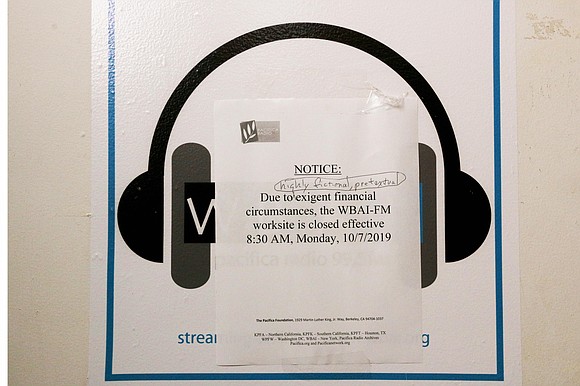 Amidst a nation in political crisis with impeachment lurking in the wings and a presidential campaign underway, the country’s only non-commercial–listener sponsored network is threatening the very existence of its New York radio station, WBAI 99.5FM/NY.

On Monday, October 7, at 9:49 AM WBAI staff and producers received a terse email from station manager, Berthold Reimers, stating that the Pacifica Foundation’s new interim executive director (John Vernile)—citing financial problems—had “terminated” all employees “as of this morning.” “As of now,” Reimers continued, “WBAI is controlled by Mr. Vernile and the National Office. There is a show on the air now that I do not recognize. This means your shows are no longer on WBAI per this action by Mr. Vernile…”

And indeed, WBAI ceased to be a local station. Locks were changed, elevator access cut off and live local programmers were yanked off the air—replaced by a satellite stream designed to mimic the tone and flavor of WBAI’s regular schedule. One only had to listen for a couple of hours, however, to understand that the new programming was substantially toned down and ethnically marginalized.

Reimers’ emailed memo was quickly followed up, at 10:17 a.m., by an impersonal, undated and unsigned email to producers on Pacifica letterhead (and with the subheading, “Radio With Conscience”):

“Due to ongoing and continued projections of further financial losses at WBAI, local station operations are being discontinued as of October 7, 2019. We realize this news will come as a deep and painful shock, but we can no longer jeopardize the survival of the entire network.

We are grateful for all your efforts over the years to help WBAI and its listeners. We deeply appreciate the loyalty you have shown to the station and the Pacifica radio network.

We will relaunch WBAI once we are able to create a sustainable financial structure for the station. We will be airing a network source called Pacifica Across America until then.

The very fact that this rogue faction of the 22-member Pacifica National Board and headed by Vernile decided to launch this in the middle of a fund drive in which listeners had already pledged support for the current WBAI program grid was disregarding at the very least and fraudulent in nature.

Quickly, obviously pre-crafted press releases flooded New York’s media asserting that the drastic action was necessary due to a financial crisis at the station and assuring all concerned that this was just a means to “transform the outlet” into “the best Pacifica has to offer”—promising that “as soon as financially and logistically possible, a plan will be drawn up to address how we can rebuild our NY station into a vibrant, local-going operation.”

Many questions lurk: Why did the new IED, John Vernile, refuse to meet with WBAI staff and producers upon assuming duties? Why were 11 of the 22 PNB members not included in this decision or even apprised that the lockdown was going to happen on Monday? Why was the local station board (LSB) never consulted on this matter?