The Yankees wait as other playoff teams battle to advance 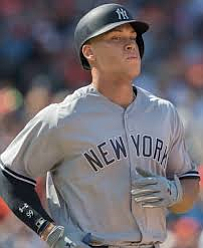 Aaron Judge's return to the Yankees' batting order Tuesday night bolstered their chances to remain ahead of the Oakland A'S in the AL wild-card race. Contributed

MLB schedulers were scrambling late last night and all day today (Thursday), putting together the ALCS and NLCS schedule to complete the next round of Major League Baseball’s post season.

Both the St. Louis Cardinals and Atlanta Braves series and the Washington Nationals versus the Los Angeles Dodgers series went to five games to complete the National League’s divisional series.

The Tampa Bay Rays-Houston Astros American League Division Series did as well, concluding today to see which team will face the New York Yankees in the American League Championship Series.

The Yankees defeated the Minnesota Twins on Monday night to complete their ALDS series.

The Yankees, the first team to advance, the only team to sweep, beat the Twins 5-to-1, a road win to advance to the American League Championship Series.

The Yankees outscored Minnesota 23 runs to 7 in three games. Ten runs to 4 on Friday, the opening game. Eight runs to 2 on Saturday.

Great pitching, hitting and some key defensive plays advanced the Yankees to the next round. Their second baseman, Gleyber Torres, kicked off their scoring on Monday with a second-inning home run.

Shortstop Didi Gregorius’ grand slam on Saturday, during a seven-run Yankee third inning, further distanced them from the Twins.

“This is the postseason. You’ve got to make those plays,” said Judge. The Yankees received a variety of player contributions.

“All we did was to go out there and play our best baseball,” said Gregorius. His grand slam homerun ended his month long batting slump. He delivered a 4-for-10 performance with six RBI’s in the ALDS.

The Yankees are competing for their 28th World Series title. They haven’t won a championship since 2009 when they defeated the Philadelphia Phillies during the first year in their new building in the Bronx.