The fight for control of WBAI radio continues 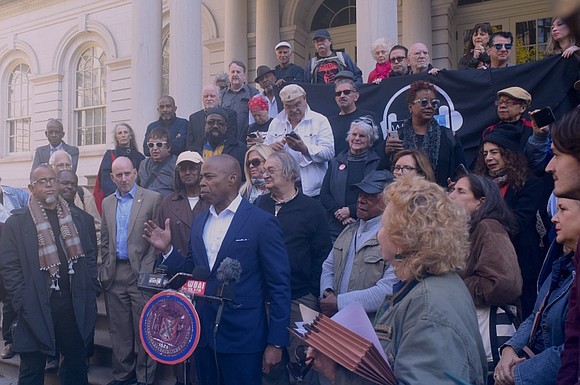 The saga at WBAI-FM continues as producers, staff and listeners of progressive, non-commercial WBAI Radio will hold a noon press conference on the steps of City Hall in response to last Monday’s sudden shutdown of the 60-year-old listener-supported radio station.

Staffers describe a scene where two security guards came into the station on the morning of Monday, Oct. 8, when the station was shut down. The security personnell locked the doors and then 12 staff members and 168 radio producers were summarily fired. The transmitter was rerouted to Pacific Radio headquarters in California cutting off local programing.

Since then, a Temporary Restraining Order was obtained in state court. Staff went into the Brooklyn station to find destroyed equipment and which left them unable to broadcast normally. The TRO was vacated in state appellate court two days later firing 12 employees. The case is now in the hands of the federal court at Pacifica’s request.

Speaking to the AmNews, attorney for staff at WBAI, Arthur Schwartz, who also has a show at the station, said that staff and management at the station filed papers to move the case back to state court.

“We got a temporary restraining order and got an appellate judge to modify that,” Schwartz said. “Not only to hire back the employees but to put WBAI back on the air.”

“WBAI was being restructured and that was reflective of the ongoing political movement in New York. What the executive director of Pacifica did he may have done it in a way that makes it impossible to come back. On the other hand, maybe all the publicity will help the station rebuild.”

That publicity came to a head this week on the steps of City Hall when staff gathered to say that there had been no advance vote by the Pacifica National Board (as mandated by its bylaws) to authorize the station’s closure, which could pave the way to sell WBAI’s broadcasting license.

Last weekend, to affirm the shutdown of WBAI, Pacifica’s National board denied participation to three of the station’s elected board members. On Sunday, a majority of the 12 board members called an emergency meeting and voted to rescind the shutdown and restore WBAI to full functioning under local control. The board’s pro-takeover minority has vowed to challenge the Sunday vote as “illegal.”

“This has been in the works for a long time,” said Mimi Rosenberg, who is an attorney/producer and plaintiff in the suit. “The intent of the secret raid–or coup–was to wound the station irreparably by wrecking the fund drive and then drive the station to bankruptcy to sell it off so that other stations in the network could feed off the monies from the sale of WBAI’s license, which is potentially worth millions of dollars.”

Radio hall of famer and well-known host Imhotep Gary Byrd, who has a show at the station, said on Tuesday that in his 50 years in the radio business the rally was the most amazing thing he’s ever seen.

“I’m trying to understand how a rogue group could come in and shut down a radio station,” he said. “How different is it that the station exists because of the contributions and the donations of you and me? When people invest in an institution they begin to feel as if they are stakeholders in that institution. How is it that the community doesn’t have a stake in the future of WBAI?”