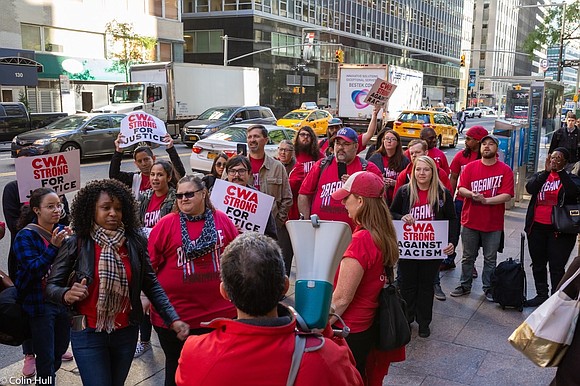 Last week, Verizon employees, N.Y. State Senator Julia Salazar and Assemblywoman Yoh-Line Niou rallied outside of a Verizon store on Wall Street to protest and deliver a 15,000-signature petition to the company calling on them to address acts of racism reported by multiple workers in the U.S.

“Racism was rampant at the Verizon Wireless store where I worked, and the company is complicit because management’s indifference allowed it to continue,” stated former Verizon Wireless employee Martin Hopkins. “Verizon Wireless executives need to take responsibility and make it clear they will not tolerate toxic work environments where racial discrimination can thrive.”

As reported by The Columbus Dispatch and the Lancaster Eagle Gazette in July, Hopkins said he was fired from a Verizon retail store in Lancaster, Ohio without explanation. He said he endured years of racial discrimination from employees and customers during his time there and believes his firing is race-based as well as he had only received positive performance reviews.

“Verizon Wireless workers around the country, including here in New York, stand with Martin and Jennifer and every other Verizon employee who has experienced racism at the company and seen nothing done about it,” said Murphy. “We are fortunate at my store because we have a union, which helps empower us to stand up and address issues in the workplace. If Verizon took these issues of racial discrimination seriously, then they would listen to workers who are brave enough to speak out.”

Alberta Sanchez, a floating manager in retail with 10 years’ experience, applied for a position at Verizon in Arizona that eventually went to a white woman with less experience and educational training. When she asked why she wasn’t chosen, she was allegedly told that she “wasn’t a good fit.” She was then warned not to accuse them of racism because “that would be hard on you.” Her position was then eliminated. She has since applied for more than 200 positions within the company and has received no callbacks.

Latasha French, and several other workers, filed an Equal Employment Opportunity Commission complaint claiming racial discrimination and retaliation against them for taking complaints to human resources.

According to the complaint, managers at the office (all white) have behaved in a discriminatory fashion towards its mostly Black workforce. A white male manager wore a “black afro-style wig” and walked around the call center, in what many believed was an attempt to mock the women of color who work for him. The same manager also allegedly took an electric wheelchair that’s used to accommodate a disabled employee and drove around the call center without permission. He wasn’t disciplined for either of these actions.

“Verizon Wireless executives should be ashamed for their failure to condemn racist acts by management,” said Jennifer Womack, an employee at a Verizon call center in Irving, Texas. “At my call center specifically, the company needs to do more to protect workers from retaliation. Management violates our rights by trying to prevent us from organizing and making our voices heard, through anti-union meetings and surveillance. The workers who help make Verizon Wireless successful as a company deserve more respect.”