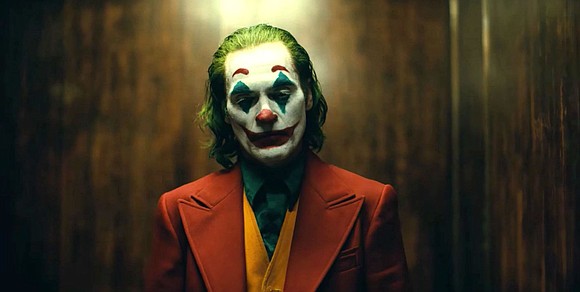 Do you know an Arthur Fleck (Joaquin Phoenix)? Here’s the thing: you might? In director Todd Phillips “Joker” we get an up-close (too close) look at an urban nightmare a little too close to the grain. Arthur is mentally ill. A freak to some but someone that’s left alone to develop into something/someone dangerous and ultimately Batman’s nemesis. But when we see him he’s a broken man, and no matter how bizarre his actions you feel something for him. Is that sympathy? Understanding? Do you/we/I know a real-life Arthur Fleck?

From almost the beginning, Arthur, in full clown costume, is standing in front of a store on a busy street, hired to carry an “Everything Must Go” sign. A bunch of kids steal the sign and then beat him up, bad. The beatdown stays with Arthur and festers inside.

It’s clear that young Arthur feels comfortable in his misery. There are moments when his desire to connect to others is clear but he’s unable to do it. He makes an effort to be normal but he knows, deep inside that it’s not going to get better. So, he turns up the dial, all the way. The more he hurts, the more he laughs and his response to almost everything is to laugh or giggle, or cackle which sounds a lot like crying. You get the truth rather quickly. He’s feeling nothing. Arthur is dead inside and close to a full on nervous breakdown.

If Arthur reminds you of Travis Bickle in “Taxi Driver” you would be almost correct. Arthur is a professional clown and aspiring stand-up comic who lives with his “crazy” mother (Frances Conroy) in a depressing apartment. The year is 1981 in a Gotham City that looks like New York City.

There is no getting around it; Phoenix’s performance is breathtaking. He is playing an underdog with a damaged mind, and yet you can’t stop wanting him to get his act together.

Arthur and his mother watch hours of the late-night talk-show host Murray Franklin (Robert De Niro). Witnessing the bonding experience leaves you feeling sad and hopeless. Trying to keep it all together, he’s fired after revealing a gun at a children’s hospital ward.

On the subway, Arthur (still wearing his clown suit) is teased and attacked by three young Wall Street types. Furious, he pulls out his gun and shoots them dead. The case becomes front-page news.

Somehow this act of violence motivates Arthur; doing tai chi in a bathroom after the murders, he begins to feel a sense of himself.

He rebels against the 1%, the ruling elite, so in his mind and heart his murderous actions are based as justice.

Then something happens … Arthur starts becoming confident, even funny. When he dances on a concrete stairway near his home, he fully commits to his insanity. He’s stopped trying to be normal (that’s impossible) and is living in his moment. In the end, we think we know how his story goes but the surprise is on us. He’s becoming (yikes, and gulp) likable, and maybe that’s the most disturbing part of “Joker.”