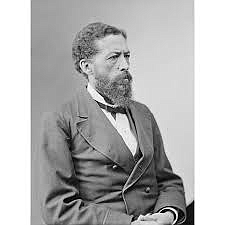 Last week at the Charles H. Wright Museum of African American History in Detroit, it was my pleasure and privilege to be in conversation with two of the leading authorities on the life and legacy of John Brown. With Dr. Louis DeCaro the discussion centered on the legendary radical abolitionist and his raid on Harper’s Ferry in 1859 which many historians believe was a catalyst to the Civil War. On the next evening with Eugene Meyer the focus was on the five Black men who rode with Brown—they as well as the leader are often neglected in the historical discourse.

In my conversation with Meyer and his comments on Lewis Sheridan Leary, one of the five who rode with Brown, he cited Charles Langston, who married the widowed Mrs. Leary, and was the grandfather of the great poet Langston Hughes. (Osborne Perry Anderson was the only one of the five to survive). Charles was himself a devoted abolitionist, like his brothers, Gideon and John. And while Meyer had additional comments on Charles, there wasn’t time to discuss his brothers, particularly John.

John Mercer Langston was born on Dec. 14, 1829, in Louisa County, Virginia. He was the son of a Virginia planter and a formerly enslaved mother. His mother was emancipated in 1806 and John and his brothers were all born free. Eventually the family arrived in Ohio, where John, like his brothers, attended Oberlin College, earning a bachelor’s degree in 1849 and a Masters in theology three years later. And again, like his brothers, John became an active member of the abolitionist movement, mainly helping runaway slaves along the Underground Railroad.

In 1855, John became one of the first African Americans in the U.S. elected to public office as town clerk in Brownhelm Township, Ohio. He is often claimed as the first African American to hold elected office. A year before taking office, he married Caroline Matilda Wall, also an Oberlin graduate, and they had five children. During this same year, 1854—after being denied entry to law schools in New York and Ohio—John “read the law” as an apprentice under attorney and Republican U.S. Representative Philemon Bliss, and was subsequently admitted to the bar in Ohio.

When the government approved the creation of the U.S. Colored Troops in 1863, John was appointed to recruit African Americans to enlist in the Union Army. He enlisted hundreds of men to serve in the Massachusetts 54th and 55th regiments as well as a large contingent for the Black regiments in Ohio. Throughout the war and its conclusion, he advocated for suffrage, insisting that the right to vote had been earned by the Black troops from their military service. In 1864, he chaired a committee of the Black National Convention demanding the abolition of slavery. This movement was the catalyst to the founding of the National Equal Rights League in which John was elected president.

After the Civil War, he was appointed inspector general for the Freedmen’s Bureau during the Reconstruction era. In 1868, he moved to Washington, D.C. to establish and to serve as the founding dean of Howard University’s law school, the nation’s first Black law school. He was appointed acting president of the school in 1872, and vice president of the school. Unfortunately, he was not chosen to be the permanent head of the law school, for reasons that remain undisclosed. Also, in the early 1870s, Senator Charles Sumner of Massachusetts sought John’s aid in drafting his Civil Rights Bill. In 1871, he received an appointment from President Ulysses S. Grant (for whom he had campaigned in 1868) to the District of Columbia Board of Health.