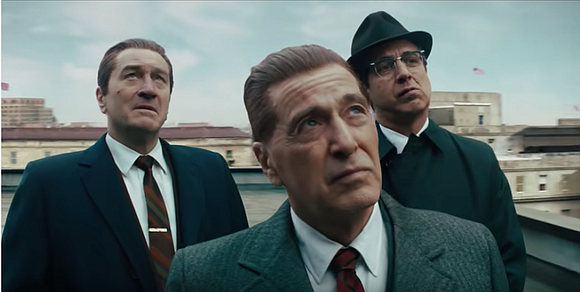 "The Irishman" on Netflix Netflix

This is a very big Mob epic with a disturbing vision of the criminal underworld that is somewhat reminiscent of his previous films, but here he goes to new and disturbing places.

The screenplay by Steven Zaillian, who adapted the 2004 memoir “I Heard You Paint Houses,” is the true story of Frank Sheeran (Robert De Niro), a World War II veteran and truck driver who, in the 1950s, finds himself doing business with Russell Bufalino (Joe Pesci), a ruthless boss of the Pennsylvania-based Bufalino crime family.

Sheeran quickly gained the Mob’s trust and, as a soldier and hitman, had a lot of assignments including working for Jimmy Hoffa (Al Pacino), whose Teamsters union was connected to the underworld. For years, Sheeran served as Hoffa’s right hand and trusted soldier, and then, according to Sheeran, he was the one given the order to murder Hoffa although the labor leader’s sudden disappearance (in 1975) was never solved.

Under Scorsese’s skillful eye, this story is bigger than “who did or did not kill” Jimmy Hoffa. He puts the spotlight on America and its lust for violence, greed, ambition, politics and ultimately corruption. Who has the real power? Why are they pulling the strings? Do the ends even matter?

“The Irishman” presents the Mob life without romance. It’s cold. It digs deep into the very heart of power.

This film is long (209 minutes) a sprawling three-and-a-half-hour magnum opus, which will have just enough screenings to qualify for an Oscar before it appears on Netflix. Do expect a lot of nominations this year.

Edited by Thelma Schoonmaker, “The Irishman” unfolds in such a way you don’t feel the length.

The characters spring through the screen with all their drive and violence and this film never, once, glamorizes that violence.

The film presents crime as a business where dog-eats-dog is how business is done. Do you want a promotion? Don’t die.

Set over 30 years the digital de-aging process, which pushed the budget to $150 million, is vital to telling this story. Set in the ’50s and ’60s, watching a young De Niro appear is almost like turning the clock back on your own life. The de-aging process is not perfect but there are moments when it’s effective.

Frank became a cold killer when he was ordered to kill German POWs after they dug their own graves.

The movie flips back in time. On the eve of Hoffa’s assassination, in 1975, Frank and Russell (along with their wives) are on a road trip to Detroit for a wedding, and they pull over near the Texaco gas station where Frank, after the war, first met Russell. Then the film goes back to Frank’s first crime. He’s delivering beef, letting them “fall off the truck” and into the hands of Felix “Skinny Razor” DiTullio (Bobby Cannavale), an associate of Russell’s.

Frank is a quick learner and does whatever’s he’s asked, including blowing up a laundry service for a mobster named Whispers, a bad move since the Italians owned a stake in it. Frank is ordered to execute the very same gangster (Whispers), which he does without emotion or hesitation.

dynamic union leader brings the film to another level.

Hoffa’s union speeches move men to action. They believe and their faith is the secret of Hoffman’s power. He honestly wants to protect their interest and it’s that sincerity (ironically) that begins to help him become powerful and therefore dangerous.

Hoffa treats the Teamsters pension fund as his money, using it to bankroll the hotels of Las Vegas. You get a deep dive into power dynamics and the rivalry between Hoffa and New Jersey crime boss Anthony “Tony Pro” Provenzano (Stephen Graham). They despise each other, and whether they’re fighting in prison or at a meeting over nonsense, you understand just how crazy the lust for power can make a person.

Scorsese makes the lines between the personal and political blurry.

Frank’s assignments go beyond simple murder. He’s asked to assist in a weapons shipment that turns out to be for the Cuban Bay of Pigs invasion. The film presents the JFK assassination as an underworld inside job, and whether you agree or not, the recipe of the Mob, the Teamsters and the JFK administration—with the former bootlegger, papa Joe Kennedy called upon to repay favors—makes a compelling story.

When Hoffa is released from prison, instead of keeping his mouth shut, he tries to win his seat back from Frank “Fitz” Fitszimmons (Gary Basaraba), his former No. 2, who is tied with the Mafia. Hoffa starts to play dirty, blaming him for everything. And that, in the end, this is what gets him “killed.”

Hoffa is stubborn. He won’t compromise and under Pacino’s masterful instrument he’s a force of nature.

When Bufalino tells Frank that the “order” has come down from on high, you know that Frank will carry out the order without a second thought even though he is a long-time mentor and a friend, to Frank it’s just business.

Later, Frank admits to having guilt but not about the murder, no, but about the phone call he made to Jimmy’s wife. Here we finally see his pain.