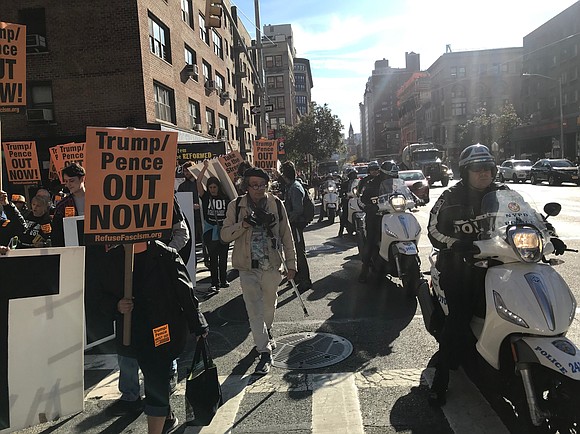 “This is just the beginning of five Saturdays of protests here in New York City and Los Angeles,” Dix told the crowd, “and we must reject Trump’s whole fascist agenda.” And almost on cue, a hundred voices chanted “Trump/Pence Regime Must Go!”

With the NYPD clearing the way and escorting marchers up the busy streets of midtown Manhattan, onlookers were asked to join the protest and many did, raising their voices that thundered up Sixth Avenue and on to Fifth Avenue where more demonstrators were already assembled at Trump Tower.

“We know the impeachment process is in motion, but we can’t wait and leave things to the Democrats,” Zee said. “There’s only one way to stop Trump and Pence and advance every struggle for justice—it is the power of the people in the streets.”

And for nearly three hours the marchers commandeered the streets and boomed their voices against the current administration, taking up positions in front of Trump Tower and across the street.

After several minutes of interviews and chanting at Trump Tower, a still considerable number of protesters marched over to the square at Fifth Avenue and 57th Street where in front of the fountain Taylor reminded the crowd that “we are not through yet.” And after announcing that each Saturday until Nov. 16 rallies will begin at 2 p.m. at Union Square. “And now it’s time to hear from Andy, Carl and Cornel once more.”

“People ask me how I could work with revolutionary communists,” West began, after noting that he was a revolutionary Christian. “I will work with them to the degree they are fundamentally committed to fighting fascists!”

His remarks were greeted with screams of approval by a chorus of voices growing increasingly hoarse after a long day of chanting. But that energy and enthusiasm never waned among a squadron of protesters leaving the rally yelling “Hey, Hey, Ho, Ho Trump and Pence have got to go!”