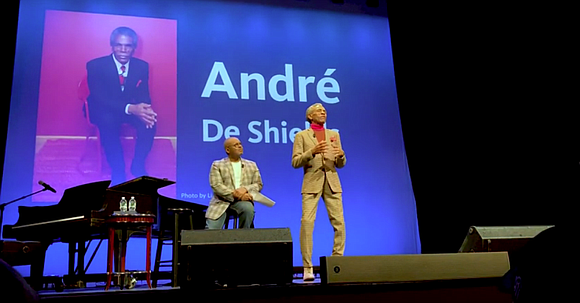 The 2nd Annual Black Theater Fall Preview, sponsored by Walk Tall Girl Productions, AUDELCO and Project1Voice, was an immense occasion at the Schomburg Center for Research in Black Culture. Marcia Pendelton, founder of Walk Tall Girl Productions and Black Theatre Online, Jackie Jeffries, president of AUDELCO, and Erich McMillan-McCall, founder of Project1Voice, took to the stage. “We have come here to celebrate the presence of Black theater on Broadway and beyond,” Pendelton remarked. She had everyone stand give a final standing ovation to honor Jessye Norman and Diahann Carroll.

Tony Award winner Andre De Shields, who won his first Tony for playing Hermes in “Hadestown,” was honored for his five decades on Broadway with a Lifetime Achievement Award for Artistic Excellence. An impressive bio was read. He is a performer, director, choreographer and educator. The audience went wild with cheers as Andre stepped onto the stage. “May I be bold? The Spirit is in the room, is it not? Do you feel the Spirit sanctifying this space? Yes? Then let us pray,” De Shields declared. He then burst into leading the room in an inspired rendition of “Lift Every Voice.”

During the Tonys, De Shields gave three cardinal rules for life. He stated, “Here’s cardinal rule number 4: pursue only the dreams that have your name on them. The universe conspires with you when you surrender to your destiny because the universe was made for your pleasure.” De Shields, best known for originating the role of the Wiz in “The Wiz” on Broadway, shared his audition experience for the show. “It was in the Majestic Theatre with the ghost lights and the stage manager of the show introducing the next artist. There was a hush in the house as you walked across the stage. I auditioned for the Scarecrow, I got cut. I auditioned for the Tin Man, I got cut. I auditioned for the Lion, I got cut. So what else was there to be. I asked Ken Harper, the only Black Broadway producer at the time, if I could audition for the Wiz. At first he said no, when I asked again he said okay, give him a call back and let him audition for the Wiz. I came in from Chicago, I had Jimi Hendrix hair, 5-inch platforms, I wore hot pants, I wore a halter and I didn’t sing from the American songbook per say, I sang ‘Midnight Hour.’”At that point he spontaneously burst into song and the audience clapped to accompany him. Andre was being Andre, as special and fabulous as ever. He said, “Harper stood up and said, ‘That’s my Wiz.’”

Let the previews begin: First up was “A Christmas Carol in Harlem”; the song “Keep Christmas” was performed. The show will run from Dec. 4-21 at Aaron Davis Hall. “American Slavery Project—Unheard Voices” was announced. It took place Oct. 15 and 16 at the Sheen Center at 18 Bleecker Street.

There was a panel with Black playwrights and directors representing in currently running and upcoming works: Donja Love, playwright of “One in Two” which will play at The New Group as of Nov. 19, 2019 to Jan. 12, 2020; “The Dark Star fromHarlem: The Spectacular Rise of Josephine Baker” had director Glenn Waters and will play at La Mama starting Nov. 21; “A(loft) Modulation” by Jaymes Jorsling is playing through Oct. 26; and “Slave Play,” with director Robert O’Hara, is playing at the Golden Theatre on Broadway. Each shared some information about their productions, and playwrights shared why they wrote their shows. Some got very personal, like Love who shared that he wrote “One in Two” because it was coming up on the anniversary of when he was diagnosed with HIV. “I found myself thinking about what it means to be marginalized and all the marginalized folks out there and how can I navigate through that, and what it means to look at your reality and what it means to uplift yourself and I just started writing.”

There was a video preview of “Tina: The Tina Turner Musical” which started playing at Broadway’s Lunt Fontanne Theatre Oct. 12. It looked exciting and electric! There was a sexy scene performed from “Sassy Mamas,” written by Celeste Bedford Walker, which is playing at Black Spectrum Theatre in Queens, as it celebrates its 50th anniversary season. Directed by Lorna Littleway, this play is about three older women, Wilhelmina, JoWillie and Mary, who decide they want relationships with young Black men. That show runs through Oct. 27. They will also be doing “Twas the Night Before Kwanzaa,” a production called “Black Love,” plays about Mae Jamison and Aretha Franklin and they will be doing “Having Our Say.”

The Apollo Theater presented TaNehisi Coates’ reading and video “Between The World and Me” with chance to have a community dialogue.

Next was a panel of Black theater artistic directors of places that develop and nurture new Black playwrights, with Indira Etwaroo of The Billie Holiday Theatre in Brooklyn which has “Reparations” coming up which is a part of the New Windows Festival.

A scene was presented from “Reparations” with cast members Lisa Arrindell and Kamal Bolden and it was engrossing to watch.

The Black History Museum, an immersive experience, will run Nov. 1-24. Audience members, up to 60 at a time, are given a character and walk through the levels of the museum, the focus of which will be love letters that slaves wrote. The audience will look at what it means to be Black in this country. For tickets visit smokemirrors.org.

“Broadbend Arkansas” is an upcoming musical about the legacy of violence and racial oppression that Black families have experienced. The play will run Oct. 25-Nov. 23 at the Duke on 42nd Street.

Broadway’s “Betrayal” star Zawe Ashton has written “for all the women who thought they were mad” and it is being performed at Soho Rep. from Oct. 14 to Nov. 17. Stephanie Berry did a monologue from the play, playing a woman mourning her daughter’s suicide. It was quite moving to see. Anna Deavere Smith’s “Fires in the Mirror” is coming back and it will play at the Signature Theatre Oct. 22 through Dec. 8, 2019. The play’s director, Saheem Ali, was on hand to talk about the production. Other important shows at the Signature will include Katori Hall’s “The Hot Wing King” from Feb. 11-March 15, 2020 and Dominique Morisseau’s “Confederates,” which will run May 12-June 2020. “The New Englander” is extended through Dec. 1. A revival of Ntozake Shange’s “For Colored Girls Who Have Considered Suicide/When the Rainbow Is Enuf” will be presented by the Public Theatre through Nov. 24. For tickets, visit publictheater.org.

A scene was performed from “Run Boy Run” and “In Old Age,” which played at the New York Theatre Workshop up to Oct. 13. A new play is coming called “Thoughts of A Colored Man”; playwright Keenan Scott II performed a scene from it. The American Theatre of Actors will be presenting “The Buffalo Hero of WWI: The Wayne Miner Story” from Oct. 24-27.

The evening was full of powerful performances and Black theater love! What was very exciting at the end was that Andre De Shields stayed and as people left he graciously took pictures with all the excited, adoring fans. Marcia Pendelton deciding to do this as an annual event is stupendous!