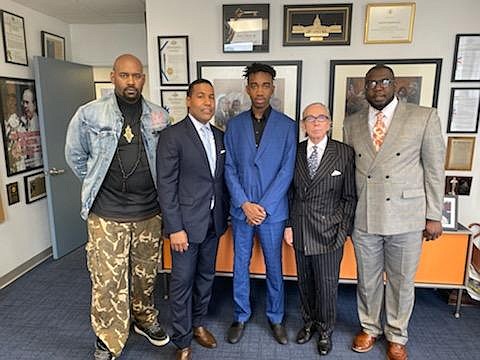 “I am calling on Brooklyn District Attorney Eric Gonzalez to do the right thing and drop all charges against 15-year-old Marshall and the remaining teens,” demanded Anthony Beckford, president of Black Lives Matter Brooklyn. “He needs to also charge the officer who maliciously and brutally attacked 15-year-old Benjamin Marshall. There must be accountability and justice.”

Seeing a bunch of high school students rumbling with NYPD cops in a Downtown Brooklyn subway station was bad enough on Friday, Oct. 25, 2019, but then to witness on video (or live even) an officer walk up and punch a teen full in the face really sent shockwaves throughout the city. Seemingly the same officer can also be seen reportedly punching a second youth.

A group of teens were reportedly fighting on the platform at Jay Street-MetroTech subway station. Police were called, and the brawling commenced. It was caught on cell phone video, and it went viral. Jay Street-MetroTech subway station is always busy, night or day. On that Friday, it was packed, plus school had let out, plus folks were heading home.

It was complete chaos. Only matched by a week of outrage culminating by press time with the teen appearing in court on unofficial charges, the officer taken off the street, and a $5 million lawsuit being levied against the city.

Even veteran cop-turned-politician and current Brooklyn Borough President Eric Adams determined that police are supposed to de-escalate a situation, not heighten the tension and level of violence.

“The incident that took place at Jay Street-MetroTech needs to be a teachable moment for the NYPD,”Adams stated. “What the video shows is that while the officers were trying to de-escalate the situation, one officer chose to escalate, punching three separate people. I called for the city to immediately call for him to be placed on modified assignment. I commend the NYPD for reassigning the officer pending further investigation. I have stayed in contact with the families and representatives of the young people involved to ensure justice is done.”

As for this and the call for D.A. Gonzales to get involved, Oren Yaniv, Brooklyn D.A. director of Communications, said, “Mr. Marshall is 15 so any charges against him would be handled in Family Court, where the D.A. has no jurisdiction [those cases are handled by the Law Department]. The incident itself is being reviewed by our office.”

“We are demanding that there are no charges brought against my client, and an independent investigation by the D.A.’s office,” attorney Sandford Rubenstein stated.

Meanwhile, Marshall’s family announced that they are suing the city for $5 million. Rubenstein said that there were no official charges, but after the court appearance on Wednesday morning, the date was adjourned until Friday.

Police Commissioner James O’Neill said on Wednesday, “It looks like there is pending litigation so I’m not going too deep into it. But as a transit cop, the NYC subway is an inherently unsafe place. You have trains coming in and out of the station. You have a third rail. Any violence on a subway platform is especially dangerous. People have a responsibility, a duty, to comply with the police. If there is a fight, and it happens with young kids, I understand that. But when police come, they need to stop. And they will be safe. The matter is under investigation. The officer involved is on non-enforcement duty. But first and foremost, there shouldn’t be any fighting on subway platforms, especially by teenagers, because it is in an inherently unsafe place.”

According to Anthony Noel, the father of the Science Skills Center high schooler, Marshall came upon a fight that was already in progress, and in which he was not involved, and yet the cop singled him out and punched him.

Rubenstein filed a notice of claim for the family on Wednesday, stating, “We want an independent investigation and we are arranging a meeting with the Brooklyn DA Eric Gonzalez.”

Marshall’s family and community activists are not satisfied with the news that the still un-named cop has only been “placed in a non-enforcement assignment.”

As he held a press conference at Jay Street earlier this week community advocate Beckford noted, “We do not and will never sit back and stay quiet when it comes to police violence against our communities, especially when it comes to our youth. The actions of the officers in the video does not reflect the so-called ‘Courtesy, Professionalism and Respect’ that the NYPD, mayor, police commissioner and boisterous PBA President Pat Lynch talk about. We as a people and a community will not stand for these gang-like acts of violence by the NYPD against us and our children. We are calling on the mayor, public advocate and City Council to speak out and condemn the actions of the officers. We are demanding that every officer involved in the incident be held accountable and the white officer who is clearly seen lashing out and punching innocent unarmed children be immediately fired, arrested and charged. We also demand that all charges against the teens be dropped immediately, as well.”

“As I watched the footage from last Saturday’s melee at the Jay St-MetroTech subway station, I was appalled and outraged by the actions of the officer towards our Black youth. That use of excessive force was clearly inappropriate and further strains community-police relations,” said City Council Member Farah N. Louis. The Brooklyn politician and member of the Council Committee on Youth Services continued, “While I recognize the actions of a few officers should never reflect the entire police force, not only was this incident alarming—it should have never occurred. It is unacceptable that our youth have been repeatedly subjected to such aggression by those who are charged with a duty to serve and protect them. Like anyone else, our youth deserve courtesy, professionalism, and respect from police officers. I echo the call of my colleagues to place all officers involved on modified duty pending a full investigation and held accountable for their actions.”

Mayor Bill de Blasio and the NYPD did not respond to a request to answer questions about both the Jay Street and Franklin Avenue incident, where cops drew their weapons on a teen who allegedly jumped the turnstile. De Blasio did tell Errol Louis on NY1: “I’ve seen that video and the first thing to say is there’s an investigation going on by the NYPD and I think in the next couple of days we’ll have a clearer understanding of what happened and why. Clearly our officers are trained to de-escalate and to use restraint and that’s the way it’s supposed to be, but we also have to acknowledge that this was a very difficult situation. You’ve got a lot of young people who—my understanding was there was a report that they were fighting. They were on a subway platform, that means there is a danger of someone falling on the tracks, falling on the third rail. These are really sensitive dynamics and I think the job of a police officer in that situation is to stop the fight immediately and make sure no one ends up in really serious danger.”

As for the Franklin Avenue incident where cops pulled out their weapons to tackle a young Black man for allegedly fare beating, the mayor told Louis, “I understand that passengers or citizens identified that individual as someone they saw with a gun.”

Sergeant Mary Frances O’Donnell, DCPI Spokesperson, said that officers received a report that a man had a gun. Police said he ran and jumped the turnstile, only to be apprehended at Franklin Avenue on the train. There he was confronted by officers with guns drawn.

No gun was found.