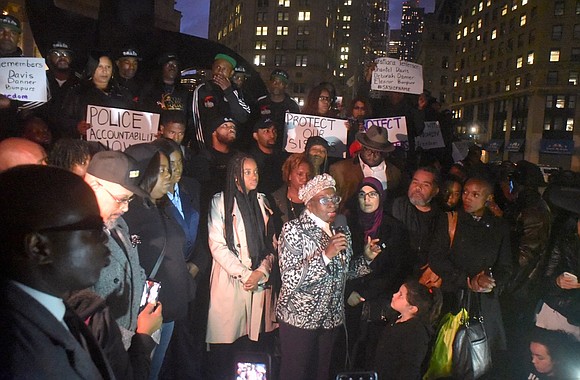 With stories of police violence littering the media landscape, activists and victim’s families have had enough. They took their outrage nationwide and are clamoring for an end to aggressive policing of Black and Brown bodies.

On Monday, Oct. 28, people across 15 different cities stood in solidarity for all Black women whose lives were taken by law enforcement. The spark for the rally was ignited after the killing of Forth Worth, TX resident Atatiana Jefferson in her own home (police were responding to a request for welfare check on Jefferson). Jefferson was playing video games with her nephew when an officer fired shots through the window striking her.

“Outrage is telling us now you can’t even be a Black woman playing video games in your house with your nephew,” said Williams to the several hundred in attendance. “This is a day of reckoning we are outraged this happened in our cities and our country and we are raising our voices like never before.”

“She was at home making memories with my nephew,” added Ashley Carr, Jefferson’s sister, who attended the Foley Square rally. “Things that she would love to do and got killed in the process for no apparent reason. It’s so unimaginable how this could happen to you.”

Tamika D. Mallory, founder of Until Freedom and one of the organizers of the rally, said Jefferson’s killing in the immediate aftermath of a former officer going to jail for killing an unarmed Black man in his own home emphasized the need for push back against police violence.

“It is absolutely outrageous to consider that less than one week after Officer Amber Guyger was found guilty of murdering Botham Jean in his home in Dallas that another Texas police officer could fire with impunity into the home of another innocent Black person,” said Malory in a statement to the AmNews. “We demand answers, but more importantly, we demand change. We will not allow Black people to continue to be preyed upon by those committed to protecting and serving them.”

Guyger was recently sentenced to 10 years in prison for shooting and killing Botham Jean in his own apartment. The former officer alleged that she thought it was her apartment (Guyger and Jean lived in the same apartment complex, but on different floors) and that Jean had broken in.

“This is difficult, I miss my brother every day even when the murder conviction was read, my first thought was I want him back,” said Finley to attendees.

Jefferson was the first person in her family to graduate high school, graduated with a biology degree at Xavier University in Louisiana and had just moved back to her mother’s house to take care of her. Jean was an accountant and a member of a church choir. Their backgrounds, however, couldn’t shield them from police violence.

One singer showed solidarity with the activists in his own way. Gospel star Kirk Franklin said he’ll boycott the Dove Awards for editing his acceptance speech after winning Gospel Artist of the Year. During the show, which aired on the Trinity Broadcasting Network Oct. 20 (the show was taped five days prior), Franklin noticed that his comments about Jefferson weren’t shown on television.

“This past weekend, a young 28-year-old lady, a young girl by the name of Atatiana Jefferson, was shot and killed in her home by a policeman,” said Franklin during the edited part of his speech. “And I am just asking that we send up prayers for her family and for his, and asking that we send up prayers for that eight-year-old little boy that saw that tragedy.”

After finding out about this portion not making it to air, Franklin took to Facebook where he posted a video blasting the Dove Awards claiming it was the second time a speech of his was edited after speaking out against police brutality. During an acceptance speech after winning Gospel Artist of the Year in 2016, he mentioned Philando Castile and Walter Scott, two unarmed Black men killed by police.

Franklin said that he’s boycotting all events affiliated with the Dove Awards, TBN and the Gospel Music Association until “tangible plans are out in place to protect and champion diversity, especially where people of color have contributed their gifts, talents and finances to help build the viability of these institutions.

“I am aware that the word boycott often has a negative connotation and finality to it, but my goal will forever be reconciliation as well as accountability,” continued Franklin. “It is important for those in charge to be informed that not only did they edit my speech, they edited the African American experience.”

An official for the Gospel Music Association issued an apology for the “misstep.”

In the aftermath of Jefferson’s death, her family and their attorney S. Lee Meritt, have called for a federal government investigation into the shooting. Carmen Perez, president and CEO of The Gathering for Justice and Justice League NYC co-founder, said that while attention’s always brought to the violence upon Black male bodies by the police, the public needs to pay close attention to Black women as well.

“When it comes to the movement for police accountability, attention to cases of brutality that harm Black men is often greater and more comprehensive than the cases that harm Black women,” stated Carmen Perez. “We see the same initial outrage over news reports and social media posts, but too often we move on far more quickly when Black women are involved.”