Knicks try to find themselves with a new mix of players 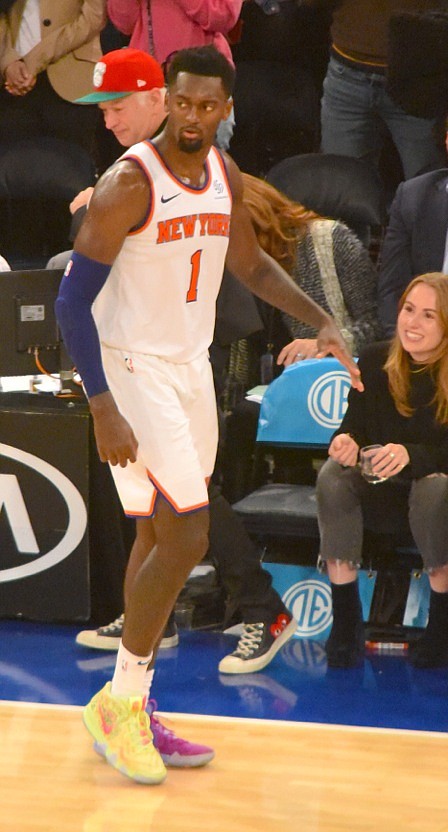 Determining that the Knicks’ matchup with the Chicago Bulls at Madison Square Garden on Monday night was consequential is not an overstatement. Although it was only the team’s fourth game of this young season, fans were already grumbling and expressing their doubts about the makeup and substance of the Knicks’ remade roster.

At 0-3, they were looking like a similar version of last season’s group that went 17-65 despite the addition of 10 new players. With so many moving parts, head coach David Fizdale has been challenged to establish a consistently productive rotation.

At their home opener on Saturday against the Boston Celtics, the crowd rained down the Bronx cheer on the Knicks as one of the borough’s gifted products, Kemba Walker, dropped 32 points to lead the Celtics to a 118-95 win. So a solid showing on Monday versus the Bulls became a necessity for the Knicks to stem the mounting frustration their fan base carried over from a season ago.

Yet for a little over 44 minutes, it seemed as if the Knicks were headed for 0-4 and further disapproval. They had trailed the entire game and were down 98-90 with 3:24 remaining when power forward Bobby Portis reentered the lineup.

Portis, who was signed by the Knicks this past summer, had been drafted by the Bulls in the first round (22nd overall pick) in 2015 and played 3 1/2 seasons for them before being traded to the Washington Wizards last season. He has been second on Fizdale’s depth chart at power forward behind starter Julius Randle.

The 24-year-old Little Rock, Arkansas native, who played college ball at the University of Arkansas under first-year St. John’s head coach Mike Anderson, hit two three-pointers to lead an improbable 15-0 Knicks run to close the game and 105-98 victory. Portis scored 11 points in the final quarter and finished with 28 along with 11 rebounds. His outward enthusiasm lifted the fans in attendance that raucously encouraged the comeback and passionately chanted his name.

“I’m just an animated player. I don’t know what I’m saying sometimes,” Portis related to reporters. “I just have fun. I love playing this game. I feel like I wasn’t myself the first couple games and I didn’t bring the energy, so I had to get back to being who I am.”

“We’ve just been waiting for him,’’ Fizdale said. “He’s played a little tight, trying to be perfect. I told him to keep letting it fly. He unleashed it tonight. That was a game.’’

“It was fun,” Portis said. “I put a lot of work in every summer. To hear the crowd say my name, it was a crazy moment for me. It was kind of hard not to hear it.’’

The Knicks faced the Orlando Magic last night (Wednesday) on the road and will meet up with the Bulls again tomorrow before returning home to host the Sacramento Kings on Sunday.