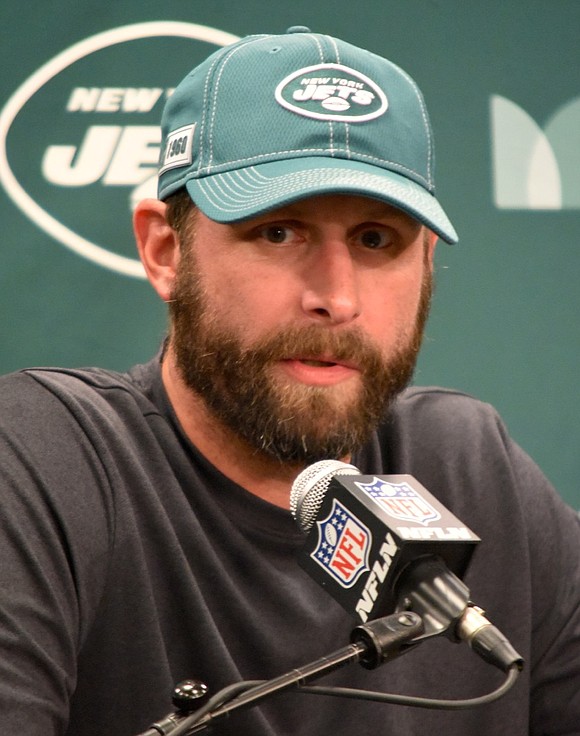 The New York Jets 2019-2020 season officially begins Sunday, a home game against the Buffalo Bills, a Division game for both. It ushers in the Adam Gase era, the Jets’ new head coach, his staff, hired after being fired from his head coaching position with the Miami Dolphins at the end of last season.

Coaching the Jets, preparing for his first season with them hasn’t actually hit Gase yet.

“I think it’ll probably hit me more toward the end of the week,” said Gase earlier this week after planning for practice yesterday, Wednesday and various team meetings. Gase thinks that it’ll become more real to him when he gets into the game plan and the details of what the team plans to do to get the season started.

The season, the 100th for the NFL, officially begins tonight (Thursday), opening with the Green Bay Packers verses the Chicago Bears.

During the season, all throughout, an “NFL 100” emblem will be featured in NFL promotions and on NFL properties. The emblem (a patch) will be worn on jerseys, placed on game balls, and painted on each NFL field.

Both the Jets and Bills look to improve from last year’s losing seasons. A 6-and-10 record for Buffalo. A 4-and-12 record for the Jets.. Along with the Miami Dolphins, 7-and -9, these teams have the misfortune of inhabiting the AFC East division which includes the New England Patriots, the NFL defending champions.

Since 2001, the Patriots have been overly dominant. Super Bowl champions six times, conference champions nine times, and the division leader the last 16-out of-19 years. The Jets will play them twice this season, in New England during Week 3 and at home during Week 7, a Monday night game.

Game 2 for the Jets, the first of their two scheduled Monday night games, is against the Cleveland Browns, 7-8-and-1 last season. It’s the return of Odell Beckham, Jr., traded from the Giants in March, to New York City, then it’s the Patriots and an early Bye in Week 4. The Jets schedule then gets a little harder.

Week 5 is a short 95 South ride down the New Jersey Turnpike to play the Philadelphia Eagles, Super Bowl winners two seasons ago, and then a MetLife visit by the Dallas Cowboys who justre-signed Ezekiel Elliott to the richest contract ever for a running back, Week 6, and New England in Week 7. Three teams expected for the post season.

The Jets travel to play the Jacksonville Jaguars, 5-and-11 last season, in Week 8, and the Dolphins in Week 9. The Dolphins trip matches Gase against the team that most recently fired him.

The Giants, who share MetLife Stadium with the Jets, also 5-and-11 last season, will be the away team against the Jets in Week 10. The Jets then hit the road again, 95 South down the Turnpike to play Washington in the nation’s capital.

The Oakland Raiders, the stars of this season’s HBO program Hard Knocks, also 4-and-12 last season, visit the Jets’ in Week 12. The Jets hit the road to Cincinnati to play the Bengals (6-and-10 last season) in Week 13 and then back home against Miami, Week 14.

The Jets end their season against the Baltimore Ravens, on the road, and the Pittsburgh Steelers here on Week 16, two more potential, post season teams. Until they play their games, the Jets’ post season potential, if any, is unknown. It’s way to early for a guestimation.