Jerry Johnson’s Ancestral Wall: ‘Recognizing those who recognized us’ 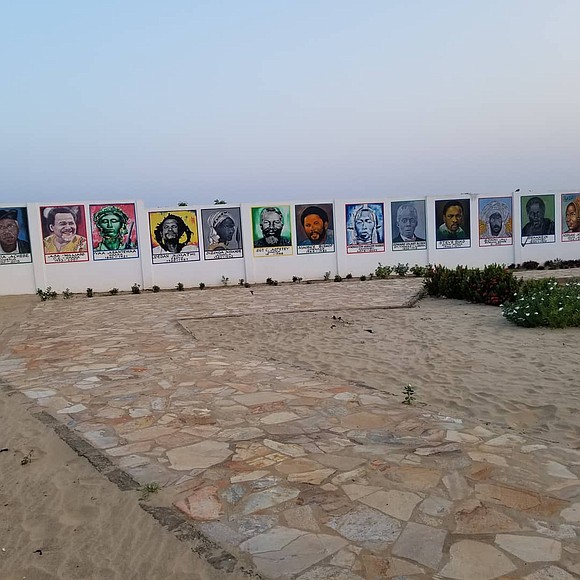 Jerry Johnson is from California. He lives in Ghana. He works in New Ningo. He founded the Ancestral Wall.

It is magnificent. There are 90 portraits of 90 heroes and sheroes and icons. Several artists used their skills to paint an outside gallery for students, visitors and locals alike. From Mariam Makeba to Steve Biko. From Na Gbewa to Imhotep.

“We are recognizing those who recognized us,” teacher and cultural entrepreneur Johnson told this reporter while walking through the altogether serene and informative grounds.

The pretty garden encompasses the impressive portraits and a really great restaurant, and terrific guest houses.

Fifteen years ago, this realized dream started as a desire to “begin teaching the local youngsters African history. But there are so many villages, so many schools I couldn’t do it logistically, so I got the idea that if I put 90 characters up on the wall, then I could bring the schools for field trips.”

Word-of-mouth spread, and now, worldwide, “It has become something of an attraction. I go from 200,000 years ago with Eve.”

There she is short-Afro’d and all. So many others too: from Eve to Francis Cress-Welsing. From King Tackie Tawiah I to Thomas Sankara. From Shaka Zulu to Dr. Yosef Ben-Jochannan.

“I picked them on themes that I wanted to teach the children, so you will see people who aren’t very famous at all, but there is a lesson or something they stood for that I wanted the children to hear in terms of our history, our ancestry, and the foundation of our African being.”

In this the Year of Return, and Ghana’s fully embracing the 400 year anniversary since so many Africans were snatched from the Coast of Guinea and brought to America and the Caribbean, Johnson is an epitome of a man returning to the source. From visitor to resident, bringing a skill set and an enthusiasm. Johnson is fully entrenched in Ghanaian culture.

“I was one of those who came from the U.S. with all of my books and my videos and thinking that I could spread some of the things we’d learned over the years in our study group meetings, and serious African study movement, with people like Cheik Anta Diop and Asa Hilliard, John Henrik Clarke who influenced a lot of us. You really have to start with the youth because there’s really a lot of bad socialization that has gone on with the youth both here and in the U.S. in the minds of African people. It is easier to implant it in the beginning.”

He told the Amsterdam News, “We do walk throughs, and more and more people from the U.S. are coming through.”

Johnson’s parting words are an axiom to live by indeed; “The objective is to create the Africans we need to solve the problems that we have,” he said. “We are Garveyites, so we know we have to build something powerful in the world.”

For more information email ejjohn12m@gmail.com or log on to https://www.facebook.com/pg/AfricanAncestralWall/reviews/?post_id=2201994403168496&referrer=page_recommendations_home_card