“Moulin Rouge” is a B’way phenomenon 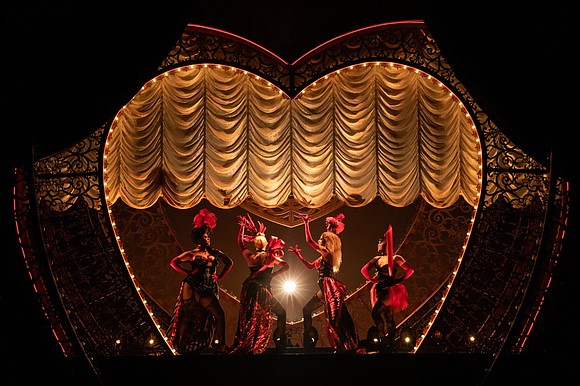 “Moulin Rouge” is a wildly fabulous, sexy, seductive, funny love story! “Moulin Rouge” is an attitude, a way of life! Before the show officially starts the audience is submerged into this very imaginative, seductive world when the cast members come out and circulate on the stage and on the side balconies, dancing in cages, crawling on the stage, speaking to each other quietly and touching each other. There are cast members dressed as the aristocracy with tux and tails on, while the women and men of the Moulin Rouge are clad in sexy lingerie. There are people dressed in clown attire. Cast members have intense expressions as they stare at members of the audience. Sitting in the audience at first feels like being at an erotic circus. These cast members intrigued the audience and the phones were out recording, even though the show had still not officially started yet.

Understand that the Moulin Rouge was a real place, a club that existed in France in the late 1800-early 1900s, where the rich could feel free to give in to any sexual fantasies, and where both rich tourists and more common audiences would come to see amazing singing and dance acts. It was a place where the French “can-can” was born.

When the musical starts the audience is introduced with excitement to Harold Zidler, the owner of the Moulin Rouge. This role is embodied powerfully and vividly by Danny Burstein, who takes on this role with an exuberance that thrilled the capacity audience.

What is unexpected and delightful is how “Moulin Rouge” weaves an entertaining story together utilizing either snippets from popular songs or entire well-known popular numbers. The use of songs from artists like Donna Summers, Whitney Houston, Patti Labelle, Carol Channing, Beyoncé, Katy Perry, Elton John, Nat King Cole, Lady Gaga and others will have you delighted, laughing and captivated. The cast would burst into songs like “Shut Up & Dance With Me,” which followed with the storyline, and was incredibly funny.

“Moulin Rouge” tells the story of Zidler who, when the club is broke, persuades the rich Duke of Monroth to come to the club and see what goes on there, and promises to introduce him to the club’s lovely star act Satine. Zidler tells Satine that the club needs the Duke’s money and that she must do whatever it takes to get it.

Meanwhile, Christian, a young American songwriter, has come to Paris for creative freedom and meets Toulouse-Lautrec and Santiago, two artists who are trying to create a musical to encourage a revolution. They decide to work together with Christian, who they need to get in front of Satine to audition one of his new songs, in order for her to sing it at the Moulin Rouge and open a door for them to get their new musical to be performed at the club. Mixed signals happen and Satine meets Christian but thinks he’s the Duke. Long story short, she finds out who he is and what he wants and they convince the Duke to help the club and produce this new musical. As part of the bargain, Satine becomes the Duke’s possession, but of course Satine and Christian have secretly fallen in love and now have to hide that fact. OK, that’s all I’m willing to share. You have to go to the show to find out what else happens.

Suffice it to say, this is a musical full of surprising moments, great songs, phenomenal singing and exciting dance numbers, but is not a musical for a young audience. The casts’ abilities are off the charts. Karen Olivo, known for “Hamilton,” is extraordinary as Satine. Her voice is fabulous! Aaron Tveit is amazing as Christian and is equipped with a marvelous vocal instrument. Sahr Ngaujah, known for “FELA,” is tremendous in the role of Toulose-Laurec; he always has such a sincerity, intensity and charm when he is on the stage. Ricky Rojas is absolutely stunning as Santiago—a Latin lover, dancing and romancing. He played the role with a comedic side that was very funny. Tam Mutu, who sings with a great passion, is excellent as The Duke of Monroth. Other members of this very talented cast include Jacqueline B. Arnold as La Chocolat; Robyn Hurder as Nimi; Holly James as Arabia and Reed Luplau as Pierre, along with a very superb ensemble cast.

“Moulin Rouge” is a Broadway phenomenon! It has a brilliant book by John Logan, based on the 2001 Twentieth Century Fox Motion Picture written by Baz Luhrmann and Craig Pearce and directed by Baz Luhrmann. The musical has awesome scenic design by Derek McLane, eye-popping costumes by Catherine Zuber, stunning lighting by Justin Townsend, captivating sound design by Peter Hylenski, music supervision, orchestrations, arrangements and additional lyrics by Justin Levine, vibrant choreography by Sonya Tayeh and poignant direction by Alex Timbers. It is playing at the Al Hirschfeld Theatre on West 45th Street. For more info visit www.moulinrougemusical.com.