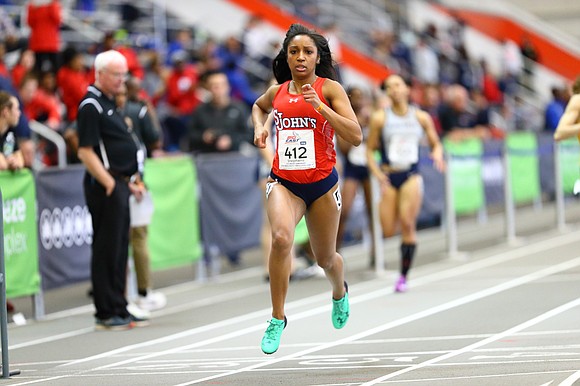 Sprinter Maya Stephens graduated from St. John’s University in 2018 after four stellar years representing the university on the track field. Over the course of her collegiate career, Stephens also represented her home country of Canada in international competition. Her hard work is paying dividends as she was recently named to Canada’s team for the upcoming 2019 IAAF World Championships, which will take place in Doha, Qatar, Sept. 27 to Oct. 6.

Over her time as a student at St. John’s, Stephens saw her athletic abilities flourish under the direction of sprints coach Aliann Pompey. Since graduating, Stephens has continued to train with Pompey in Queens, N.Y., although last week she did get a few days at home in Toronto to celebrate her 23rd birthday.

“I’m really excited. Coach Pompey and I set out to reach this goal at the beginning of the season,” said Stephens, who will take part in the 4x400 relay. “I helped the team qualify for Worlds at World Relays, so I really wanted to go. I feel really blessed to be able to utilize my talents and make it there.”

There are several St. John’s alumni who compete internationally and are working toward next year’s Olympic Games. Coach Pompey is a four-time Olympian representing Guyana. Her main event was the 400 meters and she introduced Stephens to that distance.

“Before her, I was running the 100,” said Stephens, who finished top five at this year’s Canadian Championships. “We have a really good understanding of what we both want to achieve. It’s awesome working with her and she inspires me each day.”

With the structure that surrounds a student-athlete now gone, Stephens has learned to keep her own schedule. “The first couple of weeks it was strange,” she said. “There was a bit of a learning curve, having to be more disciplined and execute some of my workouts alone because coach Pompey might be with some of the girls at a competition.

“Having to learn new ways to motivate myself and stay disciplined,” she added. “There is more freedom to post-collegiate life. You have to focus on training. That part is great and I really enjoy it.”

Although Stephens and her Canadian teammates train at different locations, she has had the chance to work with them at relay training camps and races throughout outdoor season. “Athletics Canada is having us do a pre-competition camp in Barcelona to get used to the heat,” said Stephens. October daytime temperatures in Qatar are in the mid-90s.