Violence rains down on Nigerian and other African businesses in Johannesburg 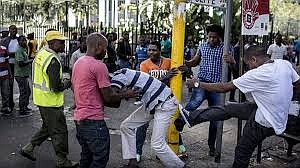 Just as state-sponsored violence threatens Latinos in the U.S., xenophobia is again threatening Nigerians and other Africans whose shops in Johannesburg  are being targeted for looting and destruction by unknown groups.

The latest spate of violence broke out in suburbs south of Johannesburg’s city center and spread to the central business district. More than 50 mainly foreign-owned shops and business premises were destroyed, according to local news accounts. Cars and properties were torched and widespread looting took place.

The attacks come before a state visit to South Africa next month by Nigerian President Muhammadu Buhari, a country whose nationals have been under attack.

“These attacks on Nigerian nationals and businesses in South Africa are unacceptable,” the government of Nigeria said on Twitter. “Enough is enough. Nigeria will take definitive measures to ensure the safety and protection of her citizens.”

Ace Magashule, secretary-general of the ANC, called the situation unacceptable. “We condemn this violence which is taking place, irrespective of whatever reasons people want to give,” he said.

It is not the first outbreak of violence targeting migrants from other African countries in some of country’s poorest areas. In 2008 about 60 people were killed and over 50,000 forced from their homes and in 2015 seven people died in violence. Migrants are blamed for scarce jobs and government services.

Some ANC members have in the past made anti-immigrant comments and Johannesburg’s mayor, Herman Mashaba, frequently attacks undocumented migrants. Mashaba is a member of the opposition Democratic Alliance.

In his State of the City address in May, Mashaba said he remained convinced the city was facing a “crisis of illegal immigration.”

His opinions drew rebuke from  African Diaspora Forum chair Vusumuzi Sibanda. “We at the Diaspora Forum are always concerned with sweeping statements made by the mayor… Our plea is that these statements cause hatred and xenophobia. They are irresponsible from leaders who are not dealing with the root cause but rather the end result.”

One of South Africa’s oldest trade unions, UASA, called on President Cyril Ramaphosa to take action. “Nothing can justify these illegal and criminal actions,” said UASA spokesman Standord Mazhindu. “Instead of making use of circumstances to commit crimes, South Africans should stand together against those who take advantage of the situation to loot and burn.”