‘Betrayal’ is interesting on Broadway! 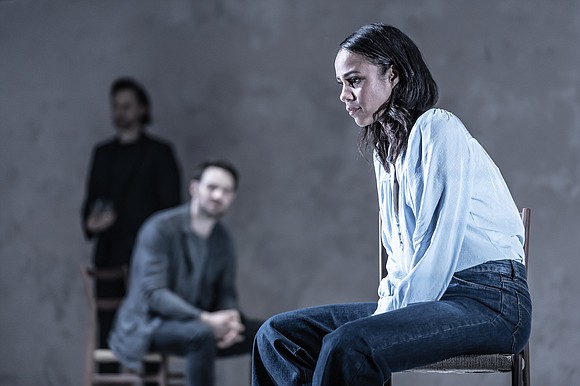 The complexity of human relationships is the focus in Harold Pinter’s “Betrayal” playing at the Bernard B. Jacobs Theatre on W. 45th Street. This meticulously staged production, 90 minutes without an intermission, looks very carefully and very calculatingly at the odd relationships that can exist between husbands, wives, and lifelong friends.

Equipped with a very sparse set, the three main characters, Robert, Emma and Jerry, share a very strange story with the audience. Pinter starts with two ex-lovers meeting after several years, recalling the romantic moments they shared and wondering if they are doing well now without each other. Pinter takes the audience back through the years and lets us see how Emma and Jerry came to be in love and have an affair—all while Emma was married to Jerry’s best friend Robert, and Jerry himself was married with children.

There’s a lot that’s very impressive about this production, including the fact that the three characters are, for the most part, on stage for the entire time. Each character is sometimes the focus of the moment; at other times, each stands expressionless at the back wall for long periods of time until, like a light being switched on, they move forward and go into the scene. It was truly amazing to see actors so well-disciplined and focused. When the spotlight is on them, they each acted out the moment with every ounce of their being.

Through Pinter’s work, the audience is invited to imagine a scenario where a husband can know that his wife is cheating with his best friend and choose to continue doing business with his friend without letting on that he knows what has happened. Robert maintains a calmness that is almost disturbing; though later he does express to his wife that he cares more about his friend then he does about her anyway. This play lets one see the ultimate betrayal to marriage and friendship, the awkwardness it can bring and how in the end no one is the winner.

“Betrayal” is the type of play you will still be thinking about the next day. The cast is absolutely off the charts and delivers extraordinary performances filled with passion, hurt, sadness and delight. It is hard to believe that all three of them are making their Broadway debuts, and what impressive debuts they are! Tom Hiddleston plays Robert, Black British actress Zawe Ashton is Emma and Charlie Cox is Jerry. The direction by Jamie Lloyd is quite captivating.