The Giants’ penetrable defense picks up where they left off 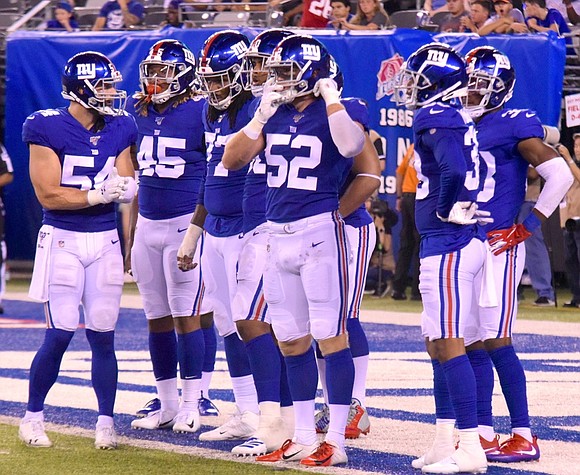 After giving up 35 points to the Dallas Cowboys last Sunday, the Giants’ defense endeavors to be much better against the Buffalo Bills this upcoming Sunday. Bill Moore photo

Last season, the Giants’ defense gave up leads in five of the team’s final seven games, a primary reason for their 5-11 record, the worst in the NFC East division. They ended the season losing by 36-35 to the Dallas Cowboys after holding a 35-28 advantage with only 2:35 remaining.

The Giants’ defense began their 2019 regular season this past Sunday against the Cowboys on the road picking up where they left off in December. After the offense staked them to a 7-0 lead on a 1-yard touchdown pass from quarterback Eli Manning to tight end Evan Engram to cap a 7-play, 91-yard drive, highlighted by a 59-yard dash by running back Saquon Barkley, the defense caved.

By halftime the Cowboys led 21-7 and put up two more touchdowns in a 35-17 win. The margin could have been wider if Dallas had continued to hunt points late in the fourth quarter but instead pulled back the reins on their offense. It was the Giants’ fifth straight loss to the Cowboys, who have an abundance of talent on both sides of the ball and are expected to be a solid Super Bowl contender this season. Conversely, with the defeat, the Giants have only eight wins in their last 33 games dating back to the start of the 2017 season.

While the offense could have been more creative and judicious in the play calling by offensive coordinator Mike Shula and head coach Pat Shurmur—Barkley had only 11 carries and four catches—the Giants gained 470 yards, their most in a game since gaining 504 versus the Philadelphia Eagles in Week 15 of the 2017 season. Despite his lack of usage, Barkley accounted for 139 of them, including 120 yards rushing.

The issue, at least at the outset of this season, rests with the defense. “We’ve got to get back to New Jersey and get to work,” said Shurmur from AT&T Stadium in Arlington, Texas following the Giants’ loss. “There’s some stuff we’ve got to get cleaned up and they need to improve quickly.”

The Giants’ pass rush, a problem last season when they were tied for next to last in the NFL with only 30 sacks, was non-existent as Cowboys quarterback Dak Prescott threw for 405 yards and was not sacked once, finishing his day with a perfect passer rating of 158.3 He carved up the Giants secondary and frequently targeted 22-year-old rookie first round pick Deandre Baker.

“We’ll look at everything we did tactically and personnel-wise and try to make the changes necessary,” said Shurmur regarding his defensive backfield unit.

The Giants will be at home this Sunday at MetLife Stadium to face the 1-0 Buffalo Bills, who defeated the Jets there 17-16 last Sunday.