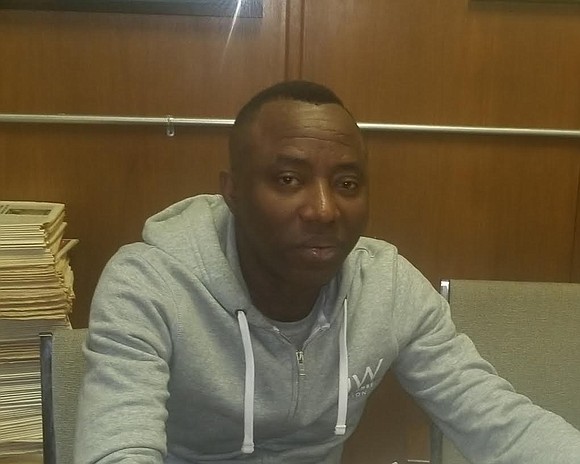 This year New York tri-state area journalist and educator Omoyele Sowore ran for president in Nigeria. He now sits in a Lagos jail.

The founder of New York-created Sahara Reporters ran an energetic campaign that caught the attention of many disenfranchised and disillusioned youth. However, in the final count, President Muhammadu Buhari garnered himself a second term. Political shenanigans being what they are, as he pointed out what he saw as election irregularities Sowore came up through the aftermath and formed the Revolution Now! Movement.

Nigerian authorities weren’t having any of that caper, and promptly arrested the lifelong activist just before a major Aug. 5, Days of Rage national action was scheduled to take place in Nigeria.

Peoplesdispatch.org reported that Department of State Services’ “heavily armed agents abducted Sowore from his hotel room in the early hours of Saturday, Aug. 3. The abduction happened ahead of a series of mass demonstrations and protests called for by Sowore and others.”

But a lawyer for the case determined, “The order by the Federal High Court to detain Mr. Sowore for 45 days is alien to the offense the suspect has been accused of. Revolution is nowhere mentioned under the Terrorism Act.”

In the din of cries that the arrest was unlawful, a court granted that DSS agents could hold him in custody for 45 days, and possibly extend it thereafter for another 45.

Supporters worldwide are now demanding the release of the New Jersey-residing father and husband.

Famed Nigerian writer Wole Soyinka blasted Sowore’s detainment. “Beyond the word ‘revolution,’” the Nobel laureate said, “nothing that Sowore has uttered, written, or advocated suggests that he is embarking on, or urging the public to engage in, a forceful overthrow of the government. His arrest is a travesty and violation of the fundamental rights of citizens to congregate and make public their concerns.”

Black Star News publisher Milton Allimadi told the Amsterdam News, “I reiterate previous demands by myself of colleagues in the media fraternity for President Buhari to release Sowore, one of Africa’s most prominent journalists, unconditionally.”

Allimadi, who is also an adjunct professor of African history at John Jay College continued, “Nigeria reportedly now has the largest economy in Africa and in recognition of its importance Buhari is one of the few African presidents to have met with President Trump in the White House. Rather than behaving like the leader of a major nation, Buhari acts like a tin-pot dictator. Sowore’s only sin was calling for nationwide protests to denounce corruption, authoritarianism, conflicts between farmers and herders, and other socio-economic woes.

“Sowore’s detention order is coming due on the 23rd of September and the first protest is planned to mount pressure on the Nigerian government for his release on the 45th days as alleged. On the 24th, President Buhari will be speaking on the floor of the United Nations’s General Assembly, and we planned to stage another protest including xenophobia happening in South Africa in which we demand justice for all the affected families.”

Meanwhile the Nigerian government spokesperson said that Sowore had “crossed the line, he threatened public safety. Nothing will happen, there won’t be any revolution. The government, which has been elected democratically, will be in place.”

Kunle Ajayi, co-organizer of Revolution Now! tweeted, “They think they can stop an idea whose time has come. You have plenty to arrest. We will show you all that our generation cannot continue with your state madness. We will hand over a better world to our children. The time to act is now!!!”