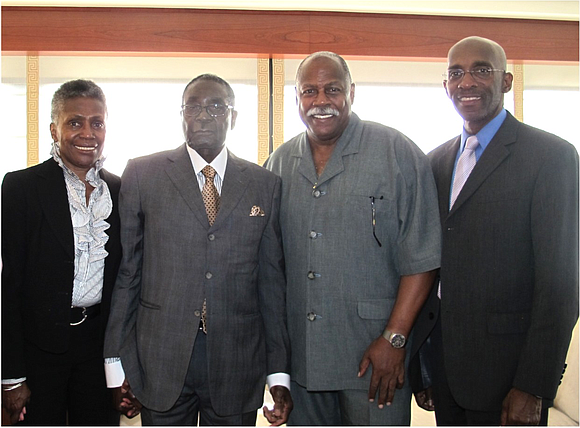 Zimbabwe’s former president, Robert Gabriel Mugabe, passed away Sept. 6 at the age of 95.

From guerrilla warrior fighting bitter colonial rule to premier of a nation he saw switch from white-controlled Rhodesia to land reclaiming Zimbabwe, Mugabe bore crippling international sanctions imposed by the west in response to his land reclamation efforts, to side-effect civil unrest, unemployment and western-backed political opponents, plus drought and the AIDS epidemic impacting the nation. He became a pariah in the mainstream media, who portrayed him as an overbearing leader, as he demanded that Britain not renege—as they had—on the Lancaster House Agreement, and not obstruct his redistributing white-held land to the Africans of the country.

Through much success then turmoil, the Zimbabwean revolutionary won the hearts and minds of the people to become elected first prime minister from 1980 to 1987 and then president from 1987 to 2017; a bloodless coup saw him removed from office.

After a long illness, Mugabe died in Singapore where he had been receiving treatment, on Sept. 6, 2019.

Dec. 12 Movement worked with and in Zimbabwe for many years. Recently they have continued their push for the U.S. and other European countries to stop the sanctions imposed on the nation.

Dec. 12 Movement’s statement on the passing of Pan-African hero and former Zimbabwe President

African people mourn the loss of one of its greatest revolutionary heroes with the passing of former president of the Republic of Zimbabwe, H.E. Cde. Robert G. Mugabe. The magnitude of his loss parallels that of African Freedom Fighters such as Lumumba, Cabral, Nkrumah, Machel, Nasser, Neto…

The Dec. 12 Movement’s history with Zimbabwe is one of decades of revolutionary solidarity and support. Therefore, it is our responsibility to: share our profound respect for this African icon, comrade and friend; point out some key historical highlights and accomplishments that are political, concise and which honor the lessons he taught.

• It was Cde. Mugabe, the political brick layer, who took the lead in constructing the Zimbabwe African National Union party. ZANU was the political weapon the people of Zimbabwe needed for the sustained assault on western-backed British/Rhodesian colonialism. The Party, the agitator, educator and organizer of the Zimbabwe revolution, was the prerequisite to the success of the people’s armed struggle for independence.

• Cde. Mugabe was a Zimbabwe National Liberation War Hero and also a visionary Pan-Africanist who saw Zimbabwe, Africa and its scattered diasporan descendants in a global context and by necessity fighting for African peoples’ right to self-determination.

• Cde. Mugabe and the ZANU party took the lead in settling the Zimbabwean/British/Rhodesian Lancaster House independence negotiations in 1980. These negotiations witnessed Zimbabweans putting the strategic interest of Southern Africa over the immediate interest of Zimbabwe. The settlement preserved key white land rights for 10 years in order to protect and advance the liberation struggle in South Africa.

• Cde. Mugabe and the ZANU led government fought an internal civil war for the preservation and consolidation of one Zimbabwe. The war saw the emergence of a unified country and party under the leadership of the ZANU-PF (Patriotic Front) party—a party whose unity to this very day is demonstrated in practice—unbroken by every conceivable western plot to divide and conquer.

• Cde. Mugabe and the ZANU-PF led government answered the historic demand of the Zimbabwean people for land—the goal for which their liberation war was fought. Land is the fundamental starting point and foundation for real democratic rights. And to fulfill this human right, the government transferred millions of hectares of stolen land back to Zimbabweans—the largest repatriation of stolen colonial property in the history of Africa.

• Cde. Mugabe and ZANU-PF’s unity, intelligence, creative genius and commitment have sustained Zimbabwe and its people through two decades of relentless western economic assault, led by the British and their “Kith and Kin” American brethren, to break the back of the Zimbabwe revolution. They have failed.

• Cde. Mugabe and the ZANU-PF led government took the lead at the 2001 U.N. World Conference Against Racism in supporting the declaration that the trans-Atlantic Slave Trade, Slavery and Colonialism were “Crimes against Humanity” laying the international legal basis for Reparations to the victims.

• Cde. Mugabe and the ZANU-PF led government took the lead in chairing the military division of SADC [Southern African Development Community] in sending troops to defend the Democratic Republic of Congo against western plots to divide and balkanize the country to steal its wealth.

• In 2004, Cde. Mugabe and the ZANU-PF led government, exposed and arrested at Harare Airport the participants of an international coup attempt against Equatorial Guinea, backed by British financial interests and led by Sir Mark Thatcher [son of former British Prime Minister Margaret Thatcher], South African and British mercenaries. The attempted coup, which arose from of the discovery of vast oil reserves in Equatorial Guinea, was designed to give preferential treatment to British financial interests.

The role of H.E. Cde. Robert G. Mugabe in defending the African revolution is fact. Revolutionary ZANU-PF, whose building was one of his greatest accomplishments, lives on after his passing.

Of course there will be more to say, think and analyze concerning the lessons that Cde. Mugabe taught and learned himself. However, what cannot be contested is his commitment to the liberation of Zimbabwe and his contributions to the African revolution.

This commemorative statement on H.E. Cde. Robert G. Mugabe will be expanded Tuesday, Sept. 17, 2019 at 6:30 p.m. at All Saints Episcopal Church, 88 St. Nicholas Avenue [off 114th St.]—and further enriched by the return that day of a  Dec. 12 Movement delegation from the funeral and burial at Zimbabwe’s National Heroes Acre of this African icon, comrade and friend.