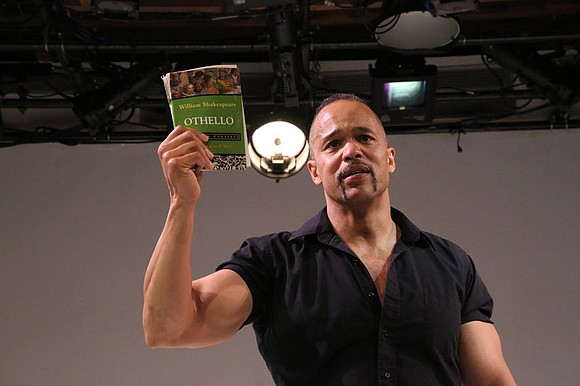 Keith Hamilton Cobb has created and stars in a brilliant, thought provoking play called “American Moor” playing at the Cherry Lane Theatre at 38 Commerce Street in Greenwich Village. In it, he plays a Black actor auditioning for a young, white director for the role of Othello or, as the white director says, “the Big O.” Cobb portrays the frustrations that big, Black, older actors can experience (including just coming onto the stage to audition for the role and having a young white director explain the role of Othello, a Black Moor, to a Black actor).

Cobb beautifully articulates his powerful command of Shakespeare’s works giving snippets of monologues from different characters that he is not considered for, like Hamlet, Romeo and Richard II. Cobb has side conversations with himself reflecting on the depth and explaining the complexity of Othello—he is more than a general, a man who develops an irrational jealousy and murders his white wife. He explains that Othello’s struggles hold 400 years of Black men being feared, misunderstood and stereotyped. Cobb lets the audience know how and why, as a Black man, he directly identifies with the misinterpretations of this character.

Cobb angrily and eloquently displays his frustrations at the process that he, as a classically trained actor, must endure, including having to suffer the judgmental eye and attitude of a white person who knows nothing about Othello, the experiences of the character, or Cobb’s experiences as a Black man on stage. Cobb brings a breadth of insight that is not utilized and often is ignored. He has to play the phony game of smiling and trying out the director’s inane suggestions for the delivery of the character.

It is amazing to watch how arrogant this white director can be, who thinks he can tell a man who was born Black, lives as a Black man, how to portray a Black character.

Cobb vented for Black male actors across the board and one can imagine that the frustrations he expressed throughout “American Moor” are daily fare for Black male actors. It is sad that Black men often find themselves pigeonholed into certain types of roles, which is why it’s so refreshing to see Black actors onstage performing the classics.

The irony about “American Moor” is that as Cobb captivatingly delivers various Shakespearean monologues, his mastery of the piece is crystal clear: he clearly demonstrated his ability to successfully deliver romantic, male, lead characters with passion and brilliance.

Stupendous, powerful, poignant, an affirmation on Black classical talent, heart, soul and depth, that’s the best way to describe “American Moor.” Bravo Cobb. You give your people a reason to laugh, reflect, and recognize what Black male actors have been through, what obstacles they face and conquer on a daily basis and what inspiration they can provide.

This play is also a testament to the incredible dedication that all Black actors must have to their craft. To do a job where you can constantly face rejection and could be turned down for any number of reasons you can’t control. But, regardless you keep trying until you land that role. Until you walk into that audition where the director as Cobb begs, will actually “See me.”