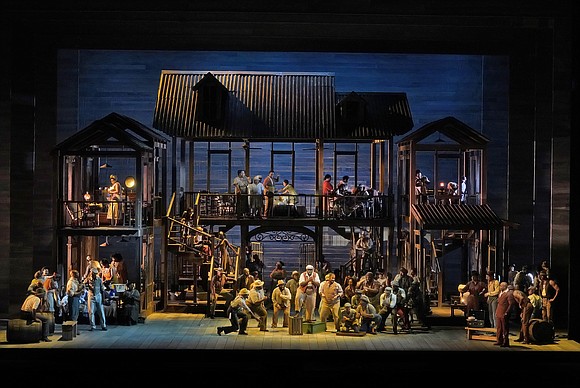 A scene from the Gershwins’ “Porgy and Bess.” Ken Howard / Met Opera photos

Standing in front of a large studio filled with some 90 singers and dancers, is a young, diminutive Black woman whose profile is reminiscent of a regal African sculpture thanks to a head wrap that forms a bun atop her head, large silver hoops dangling from her ears, a prominent brow that slopes toward tortoise shell eye glasses framing eyes intensely focused on the rehearsal of one of the show-stopping numbers she, Camille A. Brown, has created for the Metropolitan Opera’s latest production of George Gershwin’s “Porgy & Bess.”

It is a historic accomplishment that places Brown among a small group of Black choreographers and dancers who have created dances for the Met—Alvin Ailey (Barber’s “Anthony and Cleopatra” in 1966 and Bizet’s “Carmen” in 1972), Louis Johnson (“La Giaconda” and “Aida”), Katherine Dunham (“Aida” in 1963), Arthur Mitchell (“Salome” in 1973, “Porgy and Bess” in 1985), and Janet Collins, Carmen de Lavallade and Geoffrey Holder, as principal dancers. De Lavallade also choreographed productions of Wagner’s “Die Meistersinger von Nurnberg,” Dvorak’s “Rusalka,” Donizetti’s “Lucia di Lammermoor,” and the 1990 production of “Porgy and Bess,” her debut as a choreographer. Now, Brown joins this illustrious list.

Brown is a prolific choreographer “reclaiming the cultural narrative of African American identity” with work that “taps into both ancestral stories and contemporary culture to capture a range of deeply personal experiences.” She is a four-time Princess Grace Award winner, a Ford Foundation Art of Change Fellow, Jacob’s Pillow Dance Award winner, Guggenheim Fellowship recipient and TED Fellow, among other honors. While she first came to the dance world’s attention as a member of Ronald K. Brown/Evidence, a dance company, her journey reflects a vivid versatility mixed with a compelling vision of culture’s purpose. She has created works for her own company (Camille A. Brown and Dancers), the Alvin Ailey American Dance Theater, Broadway and off-Broadway shows, like “Choir Boy” and “Once On This Island,” and the award-winning TV production “Jesus Christ Superstar Live in Concert.” “Porgy and Bess” promises to reaffirm Brown’s phenomenal talent.

Asked how “Porgy & Bess” came about, Brown humility is reflected in her initial surprise: “Peter Gelb, the general manager of the Met, called and asked if I was interested. I definitely was. But, I really don’t know how people find me. I mean, when I got the call for “Jesus Christ Superstar,” I was like, “How did you guys find me?” I think Peter had seen my work around, also, I think people told him about me but I really don’t know.”

It’s been 30 years since the Met’s last production of “Porgy & Bess” and with this momentous occasion one is bound to be a bit nervous. Brown pauses then admits, “Well, I’m always terrified but there’s a tremendous excitement about this opportunity.” But, once in the rehearsal studio, she’s too busy to be terrified. “When I’m in the room it’s about the show. The other day a reporter said, ‘Oh, my God, isn’t this amazing! You’re at the Met!’ I was like, ‘To be honest with you I’m just working to make sure the show is solid.’ After all, she says, getting distracted by anything else means, “risking not creating work that comes from a genuine place.”

Brown says, initially Gelb actually invited her entire company to join the production. But, due to scheduling conflicts only two of her dancers—Chloe Davis and Malinka Reed—were free to join the Met’s 90-member cast. Still, Brown’s genius has infused the production with movement that transforms the stage into Gershwin’s fictional home for Porgy and Bess, Catfish Row. Director James Robinson suggested Brown look at footage of past productions of “Porgy & Bess” to get a sense of what had been done before. While some might have balked, Brown says, “I’m in this space where I feel confident enough with my work and what I want to say as an artist that I can look at someone else’s work and still have my own ideas.”

Judging from the rehearsals, Brown’s sure-footedness has inspired the cast. “I told the cast the goal is to really put life experience on the stage but not in a performative way.” The source of her magic is movement that captures the era’s social dance. “Every era has a specific way of moving,” Brown says pointing out that the 1970s breakdancing has a totally different aura from the 1940s and 1950s Lindy Hop. To inspire the Met performers to capture the body positioning of another place and time she says, “We talked about that during our first workshop by going back and forth talking about and experimenting with what is current now and what was current when ‘Porgy & Bess’ was created.” As they slipped into and out of movement styles, Brown jokingly cautioned, “Ya’ll can’t do the Nee Nee during this scene.”

Brown says the audience was also a major consideration. “You have to look out from the stage, whether it’s a Black story or not, and sometimes we don’t see reflections of ourselves. So, the question is how can we bring this experience and create a Black space, a space where we can really be ourselves. The wonderful thing is this effort is supported by the team. There wasn’t an instance where I thought, ‘Oh, we shouldn’t do that.’ I knew that now is the time that we do this. We have 90 Black people on stage. What are we going to do with that but be real.”

On the fact that this is an amazing moment in an amazing career, Brown says, “I am tremendously honored. I think that the thing I’m most proud of is that I’m doing it on my own terms. You know we don’t have to take our experiences, our way of moving and put it in a grinder where it comes out with all of our nuances erased. We’re able to be us, be really who we are and be unapologetic about it. Like I told the cast for ‘Choir Boy,’ I told the guys that when they go into this Step thing, most of the audience is not going to know what that is, but I said, this is for the 5 Black people that may be up in the balcony who do know what it is. I want them to see a reflection of themselves—a true reflection of Black people.”