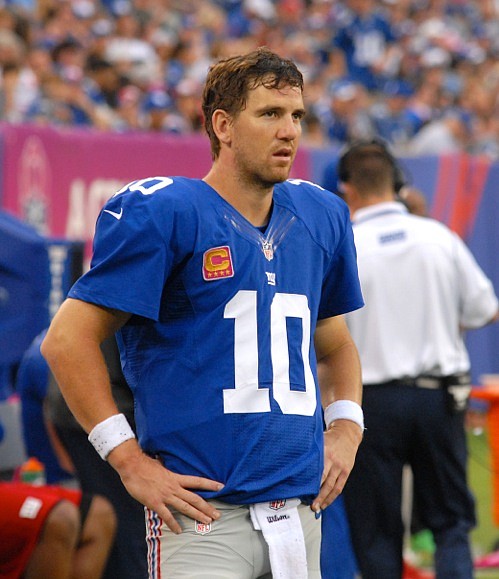 Eli Manning is a future Pro Football Hall of Fame player and the greatest QB in the 94-year history of the New York Giants franchise. He is a two-time Super Bowl champion and twice the game’s MVP. The 38-year-old Manning ranks seventh on the NFL’s list of most passing yards for a career with 56, 537 and has been the Giants’ starter since 2004. Today he is a backup.


On Tuesday, Giants head coach Pat Shurmur announced that rookie Daniel Jones will replace Manning as the team’s starting quarterback beginning this Sunday against the Tampa Bay Buccaneers on the road. It will mark what the Giants hope will be a fruitful journey for both them and Jones, one that will resemble Manning’s path despite the struggles he and the franchise have endured in missing the playoffs for six of the past seven seasons.

After losing their first two games this season to the Dallas Cowboys and Buffalo Bills respectively by a total of 32 points, general manager Dave Gettleman and Shurmur determined the time was now to move on from Manning and hand over the reins of the offense to the 22-year-old Jones, the sixth overall pick from Duke University in last April’s NFL Draft.

“Eli and I spoke this morning,” Shurmur said on Tuesday. “I told him that we are making a change and going with Daniel as the starter. I also talked to Daniel. Eli was obviously disappointed, as you would expect, but he said he would be what he has always been, a good teammate, and continue to prepare to help this team win games. Daniel understands the challenge at hand, and he will be ready to play on Sunday.”

Jones isn’t saving the season for the Giants. They have a talent deficit at multiple positions, most glaringly in their secondary and at wide receiver. Even when Golden Tate returns from a four-game suspension for using a banned substance, the receiving corps still won’t have an explosive presence as they did when Odell Beckham Jr. was their primary threat.

Beckham reminded the Giants ownership, Gettleman and Shurmur, on Monday night how difficult it is to compensate for the loss of a great player when he obliterated the Jets’ defense for 6 catches and 161 yards receiving, including an 89-yard touchdown reception in the Cleveland Browns’ 23-3 win over the Jets at MetLife Stadium.

The Giants aren’t making the playoffs again this season. They’ll have to win at least nine of their remaining 14 games and likely 10 to earn a wild card spot because beating out the 2-0 Cowboys or 1-1 Philadelphia Eagles for the NFC East division title borders on impossible.

Manning has not only been an exemplary and productive leader on the field for the Giants, he has been a model of class off of it. As someone who has always been accountable, he has never thrown his teammates under the bus when their consistently poor play—notably the offensive line—or obvious mistakes such as a receiver running a wrong route have been a source of losses.

Manning’s detractors have wrongly blamed him for the Giants making only one post-season appearance since winning the Super Bowl in 2011. Now he can longer be the scapegoat. Gettleman, Shurmur and team owners John Mara and Steve Tisch don’t conveniently have Manning as cover anymore for the Giants’ horrendous run of futility. Jones will be incessantly scrutinized as a controversial pick for a team that shockingly drafted him so high when they had more pressing weaknesses to address.

Welcome to the present and the future of the Giants.