Knicks coach reaches out to those from his community 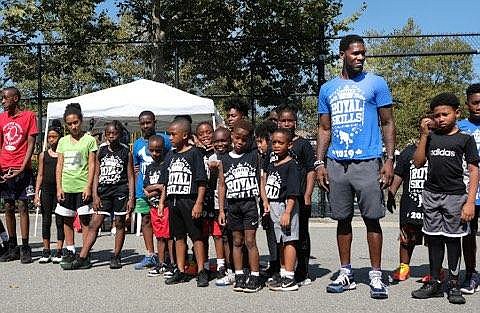 New York Knicks assistant coach Royal Ivey held his annual Skills Clinic this weekend for boys and girls ages 8 through 13 at the Renaissance School, IS 192 in Queens, New York.

Ivey, 37, born in Harlem, raised in Hollis-Queens, developed the program to help young students with not only the fundamentals of basketball, but also life skills. It’s a free, three-day basketball program designed to provide a foundation for kids to assist with their success in life.

“The chances of making it into the NBA is astronomically [low],” said Ivey. “We also want to provide kids with knowledge and education that helps them explore careers that also revolve around basketball like law, accounting, athletic trainers, sports journalist. Provide a foundation that they can build off of in order to be successful in life.”

Ivey is a former NBA player, a 6-foot-4 guard drafted in 2004 by the Atlanta Hawks. He played 10 years total with the Hawks, the Milwaukee Bucks, the Philadelphia 76ers and the Oklahoma City Thunder, where he then began applying his coaching skills in 2014. He joined the Knicks last season with head coach David Fizdale.

As a student, Ivey graduated from Benjamin N. Cardozo, also in Queens, where he played high school basketball and the Blair Academy in Blairstown, New Jersey. Ivey then played for the University of Texas before being drafted into the NBA.

Ivey’s overall experiences make him relatable to the young audience that has attended his Skills Clinic the past 11 years.

Student athletes get to personally interact with Ivey and the other coaches and players that assist him during the three days. Participants start off each day with calisthenics to emphasize the importance of being physically fit. They also learn the importance of teamwork, following directions, and the importance of respecting their coaches, teammates and opponents.

At the conclusion of the program, each participant receives trophies, medals, sports bags and other gifts.