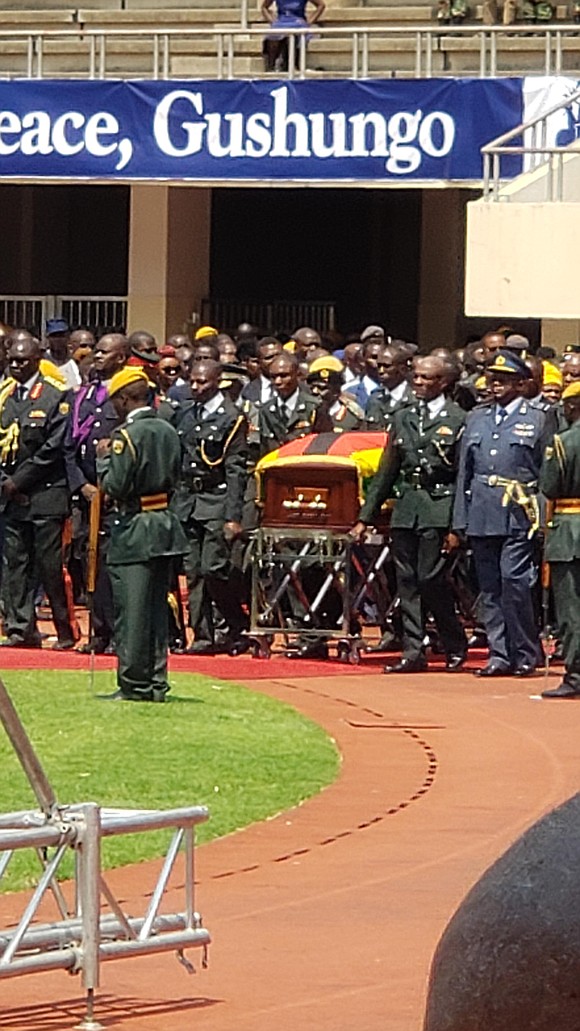 Members of the Brooklyn-based December 12th Movement have just returned this Monday, Sept. 16, 2019, from Zimbabwe where they attended the funeral of the recently late former premier. “The legacy of our heroic African liberation progenitor, the former president of the Republic of Zimbabwe, H. E. Cde Robert Gabriel Mugabe, reflects the centuries-old struggle against Western colonialism and oppression of African people for land and self-determination,” said member Omowale Clay. On Tuesday, Sept. 17, Robert Gabriel Mugabe was recognized by Black people in the U.S. for his “tremendous contribution as a strategist for African liberation” at a commemoration and celebration in Harlem, New York at the All Souls Episcopal Church.

The celebration of Mugabe’s life began with the recitation of his most memorable quotes. Iman Tessie read, “The struggle against imperialism, colonialism and capitalism is as much a national struggle for us, the people of Zimbabwe, as it is an international struggle for us together with the progressive forces…either of their own historical experiences, which are identical or comparable to ours, or because of their ideological commitment to the same objectives as ourselves or because on purely humanitarian bases, they espouse the cause of human freedom and justice.”

Colette Pean and Malik Callender served as masters of ceremony for the evening. Father Frank Morales of the All Souls Episcopal Church welcomed everyone to the historic commemoration. Nana Camille Yarborough poured the tradition libation of ancestors in recognition of their sacrifice in our collective fight for freedom.

A video presentation of the history of the ZANU-PF revolutionary war and their freedom fighters was screened which included Robert Mugabe, Joshua Nkomo, Josiah Magama Tongogara, and phenomenal organizer and activist Sally Mugabe.

Speakers included Kingston Ziyera, representative of the Zimbabwe Mission to the United Nations. Assemblyman Charles Barron reflected on his visit to Zimbabwe and Mugabe’s visit to City Hall in 2002, stating, “It was the brightest moment of my career.” Council Member Inez Barron spoke on Mugabe’s contribution to African people in a council meeting and it is now a part of its official record. Also, a representative of the CACI Cote d’Ivoire human rights organization and audience members were given an opportunity to voice their solidarity and reflect on the life and legacy of Mugabe.

Plummer declared, “Although our heroic African icon H.E. Robert Mugabe has past, his spirit lives on in the revolutionary party ZANU-PF! The struggle continues!”

“We are very clear about our efforts to end the sanctions on Zimbabwe,” said attorney Roger Wareham. “This western punitive measure has had a deliberately disruptive effect on the lives, economy and politics of this great African nation.”

Asked why the average New Yorker should engage in this conversation, Clay noted, “Because the same government tactics used abroad are employed on different levels on our communities everywhere. Including here in the U.S.”

The December 12th Movement International Secretariat is sponsoring a mass protest to “End the Illegal U.S. Economic Sanctions on Zimbabwe!” The March and Rally will be held on Saturday, Sept. 21, 2019, at 12 p.m. The march will assemble at 53rd Street and Lexington Avenue and end at Hammarskjöld Plaza on 47th Street and First Avenue, NYC.