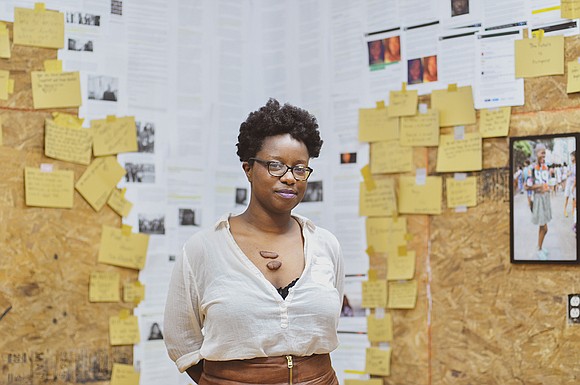 Filmmaker, Black feminist, author and organizer Nia Hampton is a young Black woman on the rise. Her articles and films are penetrating, thought provoking and movement-worthy. Hampton’s filmmaking has expanded to creating an entire film festival that focused on Black femme filmmakers and producers. Her film festival, Black Femme Supremacy Film Fest, is a powerful testament of what Black women can do in all aspects of film and media-visual arts.

As a filmmaker Nia co-produced “Not About a Riot” a documentary about the untold story of the 2015 Baltimore Uprising. Alongside the director, Malakia Aminata. She also curated a community art show and screening event to raise postproduction funds for the documentary. Most recently she was the art coordinator for the Queens Collective produced documentary “Ballet After Dark” which premiered at the Tribeca Film Festival.

AmNews: When was the moment you knew you wanted to be a filmmaker?

Hampton: I don’t recall there being a singular moment but I’ve always been a storyteller, always an artist. My family is full of performers and I was a theater and choir kid who wrote obsessively for most of my adolescence. I think I realized that filmmakers seem to make more money than others artists and I knew I didn’t ever want to perform again after spending so much time doing it growing up. Film seemed like a way to use all of my skills at once.

AmNews: What inspired you to make space for you POC and WOC filmmakers?

Hampton: There’s a void that needs to be filled. Especially in Baltimore. I realized all of my friends who were really coming into their careers in Baltimore were in music. I had to leave the city to be satiated in regards to film. I connected with lesbian filmmakers in Brazil when I was living there, and started volunteering regularly at the Black Star Film Fest in Philadelphia but eventually you get resentful over the fact that you have to leave your city to find community. So I decided to make the space myself.

AmNews: You created a film festival called Black Femme Supremacy, tell me how you came up with the name and concept?

Hampton: It was a stunt originally. I was preparing for my first solo art show at Waller Gallery and the curator wanted weekend programing featuring video work that wasn’t a part of the show. I felt weird about asking people to come to my show and watch even more of my video work so I thought to ask if any of the many of my filmmaking friends wanted to screen their work as well and it turned into a film festival. I put a call out for organizational help as well as films and ShadowandAct.com ran it and it took off. Around that same time I didn’t get hired at the Maryland Film Fest and I just knew I killed my interview. But it turns out a lot of shady shit was happening over there anyway, it wasn’t a place I needed to be. We call the festival Black Femme Supremacy because it imagines a world through the medium of film in which the Black femme is the center of the universe. It’s spicy and inspiring.

AmNews: How difficult has it been as a Black femme filmmaker to break into the mainstream film industry?

Hampton: I’m not in the mainstream by any means, but from the few Black femme filmmakers who are, I hear it’s hard as fuck.

AmNews: Tell me about your process of making space for Black femmes.

AmNews: Tell me about your self-care process.

Hampton: My self-care is in limbo at the moment. I’ve done everything, yoga, meditation, ayahuasca, nature. But this past year my self-care has been putting my head down and doing the work when I’d rather be hanging out or shopping or dating. Self-care right now looks like finally filing taxes and figuring out what direction I want this festival to go and completing the appropriate paperwork. Self care looks like digging my heels into the work I started.