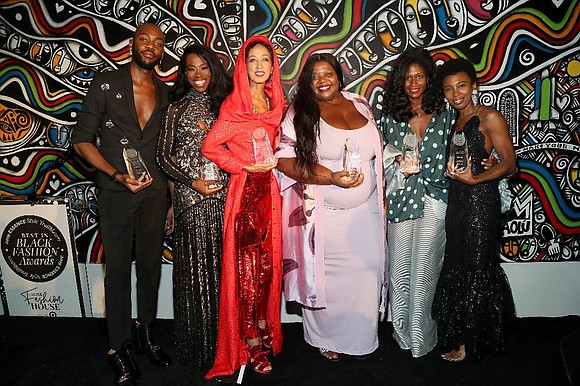 What a fabulous affair! ESSENCE Fashion House made its New York Fashion Week (NYFW) debut and premiered the ESSENCE Best in Black Fashion Awards on Sept. 4 at 523 West 37th St., NYC. The shows and events were all over the city and even in Brooklyn this season. This year’s ESSENCE winners included Fe Noel, Designer of the Year, whose label’s clothes are now selling in Bloomingdales; Rich Mnisi, Designer of the Year; Aminah Abdoul Jillil, Accessory Designer of the Year; Italsha Jordan, Photographer of the Year; Zerina Akers, Stylist of the Year and Pat Cleveland, Fashion Icon. Known for their strong service to Black women, the media and commerce company opened NYFW with an impactful event that celebrated the best designers, stylists, photographers, models, campaigns and influencers. Folks were dressed in their best.

During the evening, which was hosted by Bevy Smith, the themes focused on economic empowerment and inclusion. They also celebrated global fashion and culture. Some celebrity guests included Naturi Naughton, Anthony Hamilton, Bethann Hardison, Leyna Bloom, Justine Skye and other well-known attendees. There was a special performance by Jidenna.

The celebration continued on Thursday, Sept. 5, with ESSENCE’s Fashion House introducing a diverse slate of conversations that talked about uplifting, informing and empowering Black creatives in the fashion space. At this event, ESSENCE Fashion House held informative master classes, Black designer runway shows, influencer-led panel discussions, fashion exhibits and more. To culminate the day, there were natural hair rules with ESSENCE + Naturally Curly presentations of hair textures that celebrated diversity in beauty on the runway.

In London, England, four independent designers from Oxford Fashion Studio shook up guests at the Royal Opera House with a stunning made-to-order collection on the global catwalk. They launched ‘Voussoir,’ their new label, with designers who were hand-picked by the British fashion disrupter that has been introducing groundbreaking designers on the global stage since 2009. Showing four capsule collections, featuring 30 garments, the show caused a fashion furor.

The first designer, from the Swedish label K Ourage, focused on classic clean lines and neutral tones of black, white and beige. Details such as harnessed straps and chic athleisure inspired pieces, were interesting. South African designer Vanessa Gounden created the second capsule. Her prints were dreamy and inspired by watercolors in luxurious silks and satins. Suiting separates were perfectly tailored and could be corporate or red carpet worthy. In a watercolor-influenced print, a show-stopping gown was a favorite among stylists in the audience, seeking their next red-carpet looks for clients.

The third mini collection in the series showcased both women’s fashions and menswear. For both genders, there were noteworthy jackets with details like contrast pocket piping and faux fur trimmed collars from German label LeoLeo.

The final series focused on relaxed fit separates with color blocking in grays, burgundies and teals from U.K. designer Harriet Eccieston. Her wearable separates dominated the line along with a standout gray dress that was enhanced with a tangerine toned pop of color. The dress was designed with fabric that was structurally and geometrically draped fabric.

This entire collection was wearable, yet fashionable. There were several unexpected details. These pieces can be easily worked into your wardrobe. Just add special accessories to make the piece your own. The Voussoir collection will be available for purchase throughout the United States, Europe and the Middle East in October on the Voussoir website at https://voussoir.co.