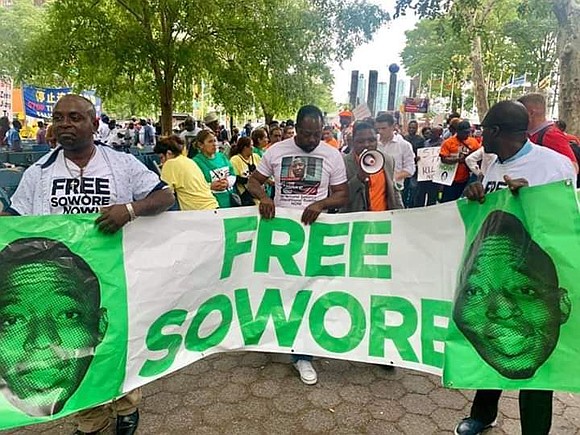 On Tuesday, Sept. 24, 2019, as Nigeria’s President Muhammadu Buhari prepared to speak at the United Nations General Assembly, protestors prepared to gather to demand the release of Bergen County, N.J. based, Nigerian-born former Omoyele Sowore. Sowore is a former Nigerian presidential candidate; he is being held in a Lagos jail.

News that an Abuja court had ordered his release did not stop dozens of people from rallying outside the U.N. with songs, chants, banners and demands. After he was arrested by government forces on Aug. 2, Sowore's supporters have called his detention illegal.

Protest co-organizer Dimeji Ayanwale said, “The first protest is planned to mount pressure on the Nigerian government for his release on the 45th day, [and the second to do the same as] President Buhari will be speaking on the floor of United Nations general assembly.”

This was the second of two big rallies, the first beginning outside the Nigerian Consulate on Second Avenue a week prior. There, his wife, Opeyemi Sowore, told the Amsterdam News that both she and their two children were both proud and obviously concerned by Sowore’s actions. They want him home, she said, but they understand his commitment. While the Sahara Reporters.com co-founder fulfilled bail conditions, his lawyer Femi Falana said he was not allowed to see him, and by Amsterdam News press time the Revolution Now activist and former African Action Congress Nigeria presidential aspirant still remained behind bars.

“The fight has just started,” Ogugua Iwelu, a self-proclaimed “African cultural architect,” told the Amsterdam News. “Nigeria must be revolutionized. Enough of the nonsense. We want progress.”