Brooklyn Nets address questions that will face them all season 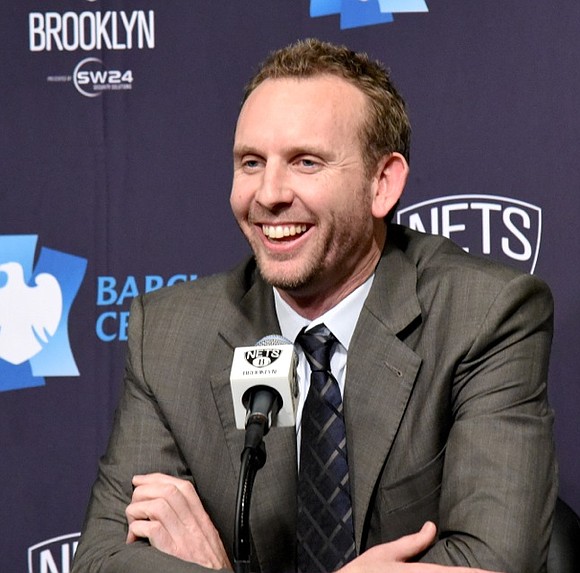 There were two chairs and two microphones and a bottle of water each for the two speakers scheduled to host the Brooklyn Nets' annual State of the Team address Tuesday afternoon at their practice facility. But there was only one speaker, general manager Sean Marks.

The Nets’ head coach, Kenny Atkinson, skipped the media session to accompany the team’s offseason acquisition, Kyrie Irving, to a hospital. Irving had been elbowed to the face during a practice shortly before the scheduled 1 p.m. press conference.

“Kenny apologizes. He will not be here today,” said Marks getting it all started. “He had to step out and accompany Kyrie to see a doctor as Kyrie got hit with an inadvertent elbow,” is how Marks described it.

“It literally happened 30 minutes ago. I wouldn’t want to speculate at all. I think this is just a case of doing due diligence. Kyrie goes and gets checked out like we would do with anyone else, and we always send staff with them.” Atkinson went.

“We’re obviously pretty excited about having Kyrie in here,” noted Marks. “We’ve seen it out on the court already in these pickup games; the leadership, the work ethic and the competitive nature that he has brought to the group has been terrific.”

Marks addressed a variety of topics from is Atkinson still the right coach for this team considering the new changes, to Kevin Durant’s rehabilitation and progression to the Nets becoming this city’s premiere team.

“Nobody puts more man hours in there, and no one is more demanding of himself than Kenny. And that’s literally all I can ask for, especially when it comes to the product that’s on the floor,” said Marks, not only confident in his head coach, but also in his staff.

Regarding Kevin Durant’s return, expected sometime next season: “I think it will be a group that makes the decision,” said Marks with some caution. “And obviously Kevin included as to when and how that return is made.”

Limited to what he can say about Rodions Kurucs’ domestic violence case regarding an incident that allegedly took place in late June, Marks took two sides.

“Those allegations, we take extremely serious as a franchise. That goes from ownership, myself to all staff throughout here. We do take them seriously. We’re definitely going to let this play out in court,” enforcing that the organization will support the NBA and the authorities in their investigation.

“My conversation with Rodi was more along the lines of we’re here for support. You’re part of our family. We’re here to support you and your family, and we’re here when you need us.”

As for the Nets' takeover of New York City basketball, Marks spoke logically. “We’ve never been focused on winning over New York, or being the team in New York. We’ve got different goals than that. I think if you go out and build something that’s sustainable, you put an entertaining group on the floor that’s passionate and competes every night, people will automatically gravitate toward that. People will want to be a part of that.”

As for Irving, upon Atkinson’s return from the hospital to the Nets’ practice facility later that afternoon, he assured those who remained, “Kyrie Irving is fine.”