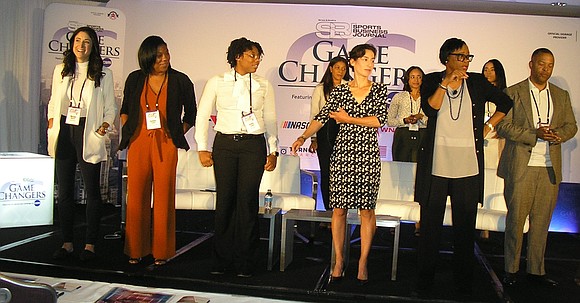 The subjects at this year’s Game Changers conference ranged from what it’s like to be a female sports agent negotiating on behalf of NFL and NBA players to the role of mentors to how participation in sports can change lives. Audience members, all of whom work in sports in some capacity, listened intently to the growing influence of women in the sports landscape.

WNBA commissioner Cathy Engelbert spoke about how she has brought her business background as CEO of Deloitte to the league. She is intent on seeing the league capitalize on this moment of opportunity for women’s sports following the incredible U.S. women’s soccer team World Cup win. Her three pillars for the WNBA are to grow revenue, expand the fan base and improve the experiences of WNBA players.

In an incredible one-on-one “Changing the Game” interview, Cynthia Marshall, CEO of the Dallas Mavericks, spoke about being brought into that NBA franchise in February 2018 to address a crisis after a culture of sexual harassment and misogyny had been exposed. Upon joining the team she wanted to execute a 100-day plan with 200 items.

“Basically what it said is that by 2019 the Dallas Mavericks would be the global standard for diversity and inclusion,” said Marshall, the first African American woman to be named CEO of an NBA team. “All my experience would suggest you need women at the table and a diverse group of people to be successful.”

Marshall had zero tolerance for inappropriate behavior, sexual harassment and misconduct. “The toughest part was to instill a new culture while also purging the old culture,” she said. “We had to make sure these men and women [who work for the Mavericks] get to have a career in sports and we have to make this a great place to work.”

Loretta Claiborne, chief inspiration officer of the Special Olympics, delivered a moving and motivating talk about how sports changed her life. Born partially blind and with an intellectual disability, she started running with her brothers in 1966. In 1970 at age 17, she got involved with the Special Olympics. She has run marathons, earned a fourth-degree black belt in karate and been the subject of a Disney TV movie.

“When I look at it, not only being a Black woman, but also a person with intellectual disability, my voice didn’t count,” said Claiborne. “The best thing I’ve seen out of [the Special Olympics] is that it gave me a voice.”

She concluded, “I’m not a professional athlete. I don’t make a lot of money. But I have the power of the voice to stand up for my beliefs.”