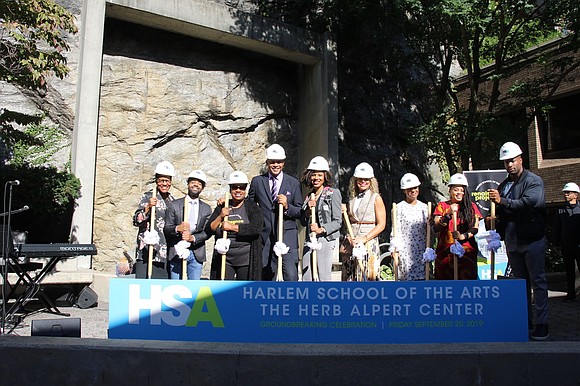 Something beautiful is happening along St. Nicholas Avenue, between 141st and 145th streets—a new educational corridor is being created.  With City College a stones throw away, a new charter school recently opened, a new lot being prepped for the construction of the Harlem Academy Campus and the Harlem School of the Arts breaking ground on a $9.5 million renovation project—the entire community is feeling a sense of new beginnings in the air.

One can say that all of this began with one diminutive, yet powerful visionary, 55-years ago: when retired concert soprano, Dorothy Maynor, saw a need during a time of great unrest in the Harlem community she called home, and decided to use her talent as an artist toward making positive change.  Dorothy Maynor had never allowed segregation to stand in her way.  She was the first African American to be asked to perform at a presidential inaugural event, singing at President Harry S. Truman’s inaugural gala in 1949.  In 1953, she took the podium at President Dwight D. Eisenhower’s presidential inauguration, which took place in Constitution Hall, the very place where Marian Anderson was refused the opportunity to perform by the Daughters of the American Revolution (1939).  And though Maynor never appeared on the stage of the Metropolitan Opera, she nonetheless became the first Black member of the Metropolitan Opera board in 1975.

This unstoppable force of nature with a voice described by the New Grove Dictionary of American Music as “a soaring, bell like soprano capable of exquisite musical effects, supported by a sincere and ardent temperament,” created the Harlem School of the Arts in 1964 in the basement of St. James Presbyterian where her husband was pastor.  She began with 20 students and when the numbers rose she persisted until she had convinced a bank to provide the financing for construction of the award-winning building that now houses HSA.

Today, another great artist, the legendary trumpeter, A&M Records founder, renowned visual artist and philanthropist Herb Alpert, his wife, Grammy winning singer/author, Lani Hall and Rona Sebastian, president of the Herb Alpert Foundation, have stepped in to give the house that Dorothy Maynor built, a much needed facelift—right in time for the celebration of the 100th anniversary of the Harlem Renaissance.  This relationship between the Alperts and HSA has been strengthened over the past nine years.  That relationship began when Herb and Lani sent a much needed infusion of capital to help the school during difficult financial times and his support has never wavered.

Dorothy Maynor’s vision and her mission was to make art accessible to all young people and to use the arts to make a difference in the lives of  “...boys and girls in our area...that just by learning to concentrate on mastering an instrument, or in the blending of colors, or in the careful use of the English language...in some way this child may be taught to dream and to realize that dreams are quite real.”

On Friday, Sept. 20, city officials, community representatives, members of HSA’s board of directors, staff, parents and students gathered for an official groundbreaking celebration in the courtyard garden that will be included in the renovation and improvement of the building over the next year. It was a joyous occasion that had Maynor been around, would have no doubt brought a smile to her face and tears to her eyes.

Among the invited guests was Pazel Jackson, the banker who provided the original loan to Maynor that would finance the construction of the 37,000 sq. ft. facility. He recalls the impressive woman whose vision she was determined to make a reality.

Arts classes at HSA will continue un-interrupted.  Fundraising also continues, in October, the organization’s major event, The Mask Ball, will be held Oct. 21, visit hsanyc.org for information on tickets and tables for this exciting event held at the Plaza Hotel.