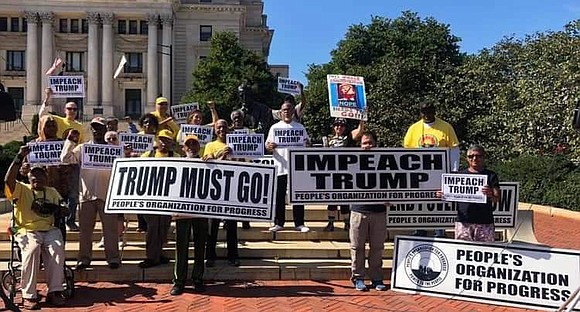 “I’m beyond pleased that a strong majority of my Democratic colleagues have joined us in the effort to hold accountable and impeach the most unlawful and unpatriotic man to ever occupy the White House.”

Waters continued, “As I have stated time and time again, Donald Trump is a dangerous and dishonorable man. He has no respect for our democracy, our Constitution or the rule of law. It is past time that Congress fulfills its constitutional duty to impeach him. I am elated that it appears that day is upon us.”

In her brief but firm statement outside her office in the Capitol, Pelosi said, “The actions of the Trump presidency revealed dishonorable facts of the president’s betrayal of his oath of office, betrayal of national security and betrayal of the integrity of our elections.” Opening the impeachment inquiry, Pelosi waited patiently while Trump accumulated enough problems to practically condemn himself, none of the improprieties more grievous and harmful as the phone call to Ukraine’s president, Volodymyr Zelensky—allegedly asking him to dig up some dirt on Joe Biden and his son, Hunter.

But according to most pundits familiar with the issues facing Trump, the conversation he had with Zelensky is only the tip of the iceberg, more damning may be the complaint filed by a whistleblower that has been blocked by Joseph Maguire, the acting director of National Intelligence. This is perhaps the most significant brick in Trump’s stonewalling.

Upon hearing of Pelosi’s move, former Vice President Biden, busy on the campaign trail, said the impeachment inquiry should begin if Trump continues to stonewall. “I can take the political attacks,” he said. “They’ll come and they’ll go, and in time they’ll soon be forgotten. But if we allow a president to get away with shredding the United States Constitution that will last forever.”

Earlier before Pelosi’s announcement, Trump anticipated her action, calling it all a “ridiculous witch hunt,” words he has repeated again and again. “I’m leading in the polls,” he added. “The only way they can stop me [is]

And the inquiry is just the beginning of what is sure to be a long arduous fight with the GOP already presenting signs of opposition. It is a good sign, though that the Senate has voted to request the whistleblower’s complaint that was delivered to the inspector general and is now held hostage by the DNI.

News headlines—print, broadcast and digital—screamed the new state of affairs.

Public reaction has been palpable—the sentiment had already been brewing in the air. Days before, on Saturday, Sept. 21, the People’s Organization For Progress had organized an “IMPEACH TRUMP NOW” march and rally at the Lincoln Statue on Springfield Avenue in Newark, N.J.  POP’s chairman, Lawrence Hamm, had invited, “Everyone that supports the impeachment, removal from office, or electoral defeat of President Trump” to attend. And “The Late Show with Stephen Colbert” television show witnessed an almost one minute long ovation when the comedian host mentioned the news that Pelosi had initiated an impeachment inquiry.

As we go to press, 216 of the 235 Democrats in the House have voted to proceed on the inquiry. “We must not forget that no one is above the law,” said Rep. Bobby Rush of Illinois.

Congresswoman Yvette D. Clarke said, “With Donald Trump in office our democracy remains at stake. It is unconstitutional and completely unacceptable for this president to contact foreign governments in an attempt to tarnish presidential candidates to interfere with and attempt to puppeteer our elections. I’ve been a vocal proponent of impeaching Donald Trump since 2017, and this latest law-breaking incident only validates my beliefs that we must move forward in impeaching Donald J. Trump from the highest office in our country.”

Rep. Maxine Waters added, “When you couple this latest action with all that we know about the president, his history, and the way in which he has conducted himself while in office, there is more than enough evidence for the Congress of the United States to launch an impeachment inquiry into this president. Despite the fact that U.S. intelligence community unequivocally concluded that Russia interfered in the 2016 U.S. presidential election, this president has shown a brazen support and deference for Russian President Vladimir Putin and the Kremlin and has continued to undermine and outright deny the validity of the U.S. intelligence community’s findings. Special Counsel Robert Mueller identified at least 10 instances of obstruction of justice by the president of the United States during the 2016 presidential campaign and through the course of the Russia investigation, and he furthered the scope of what we know about collusion and coordination between the Trump campaign, Trump’s allies, and the Kremlin in their efforts to undermine our election systems on Trump’s behalf.