Kids took to the streets for Climate Strike in NYC 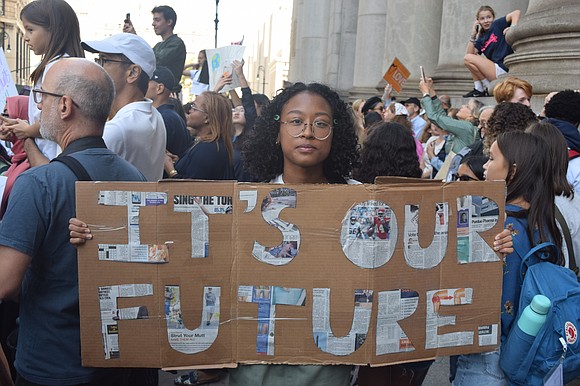 On Friday, Sept. 20, people took to the streets of lower Manhattan in protest days before the start of the United Nations Climate Summit, with hopes of bringing awareness to climate change and demanding new policies from the government.

Climate change has been a prevalent topic in media, economics and politics. While many do not see climate change as a pertinent threat, many fear for their lives as temperatures rise on the planet and the earth continually gets more polluted.

The New York Department of Education announced that students would not get penalized for being absent from school during the march. And, many children, teenagers, and adults went out to protest climate change, along with famed 16-year-old Swedish activist Greta Thunberg.

“We all have opinions, and it is important that we share them with the next generations,” said Mia, age 11, at the Climate March, “it’s really important, and I’m just glad that the department of education is allowing us to go out today and protest our opinions.”

The march started in Foley Square, and people marched all the way down to Battery Park. As the protest unfolded, it became apparent that young people in particular were hungry for attention, and had no reservations in sharing their thoughts to anyone who would listen.

“There is something weirdly existential about being told by scientists constantly that you’re probably going to see the earth start to burn in your lifetime,” says Avery, age 16. “I do think what’s interesting is how many of us have decided to work around our mental health issues for a bigger problem.”

Although many of the children and teenagers at the rally were deeply concerned about their own future, many were also worried about future generations. For several teenagers, they were marching for the lives of their younger family members and friends as well.

But, teenagers were not alone in this sentiment. Many adults came out to support the younger generation in their fight for climate change; whether or not they had someone in their lives to personally march for.

“The earth is so important to everybody, it’s literally our mother we get everything from there,” noted 29-year-old Johanna Erias. “I have pledged not to have kids, because why the hell would I bring another life into this uncertain climate.”

“People who have systematically been left out of the conversation on climate change are the ones who are going to bear the brunt of it,” said communications assistant for the Center for Constitutional Rights, Alex Webster: “Because of the global phenomenon of anti-Blackness, because of the global effects of the slave trade; people who are left in the Caribbean, or on the costal cities and most impacted by climate change, they are Brown and Black, they are poor, and they do not have the means to move to the central parts of the country to get away from the effects of climate change.”

Another conversation that vibrated through the climate strike was the mistreatment of indigenous people. With the Amazon still burning, and indigenous territory being destroyed, this conversation seemed to be of high importance.