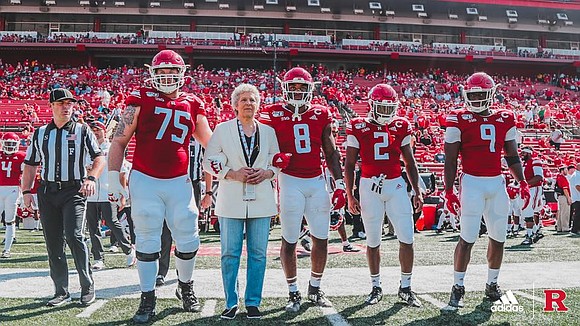 As part of a yearlong celebration commemorating 100 years since the 1919 graduation of social activist, lawyer and entertainer Paul Robeson, he was honored last weekend at a Rutgers University football game highlighting his athletic career at the school.

Originally from Princeton, N.J., Robeson entered Rutgers in 1915. When he tried to go out for the Rutgers Scarlet Knights football team, other players abused him resulting in Robeson’s nose being broken and his shoulder being dislocated. He made the team, becoming the first African American football player for Rutgers. He was a standout athlete; however, he also faced adversity. Southern football teams playing Rutgers refused to take the field if Robeson played because of his race.

Along with football, Robeson also played basketball, baseball and track. In 1917 and 1918, he was named an All-American football player. Following college, he played pro-football for three years. Robeson was inducted posthumously into the Rutgers Athletics Hall of Fame in 1988 and the College Football Hall of Fame in 1995.

Robeson’s granddaughter, Susan, was honored during the game. She served as an honorary football coach for the day. Days before the game, Susan gave an inspirational speech to the players.

“Until the day he died, Paul always asked himself, ‘How am I doing pop?’” she said. “The sole measure of success for him was not wealth, was not fame or material things. Have a set of personal values and measure yourself according to those values. If anything defines my grandfather, it’s that. Be true to yourself. On the football field and off.”

This week, the Rutgers departments of English, Women’s and Gender Studies, and American Studies are hosting a celebration in honor of Robeson. The event will feature a lecture by Shana L. Redmond, the author of the forthcoming book, “Everything Man: The Form and Function of Paul Robeson,” and a musical performance of some of Robeson’s best-known compositions.