Rock and roll instruments ‘Play It Loud’ at the Met until Oct. 1 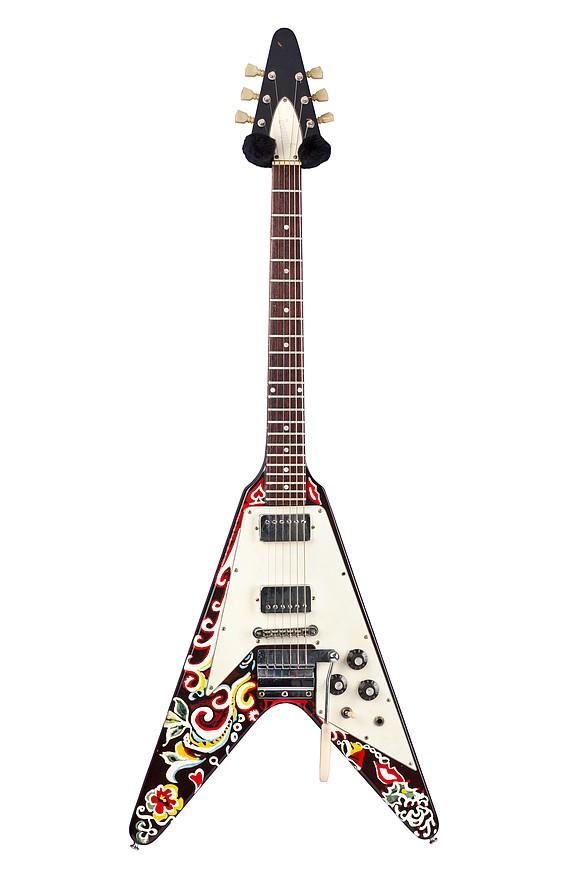 “Play It Loud: Instruments of Rock and Roll,” now on view at the Metroplitan Museum of Art, brings back such sweet memories. It features more than 130 rarely seen guitars, bass drum kits, horns and keys that were played by more than 80 famous musicians, dating back from 1939 to 2017. In this smashing exhibit, the Met celebrates the unique role of musicians while highlighting the instruments of rock music. These instruments were played by renowned artists such as Chuck Berry and Jerry Lee Lewis. (I used to watch both of these stars from side stage during an Alan Freed Tours in the late 1950s as a member of The Chantels.) Chuck Berry’s electric guitar ES-350T (1957), which was his primary guitar from 1957 until about 1963, was used to record his hit “Johnny B. Goode.” Jerry Lee Lewis’s piano is still standing, despite how hard he played it.

On view at the Met until Oct. 1, 2019, “Play It Loud: Instruments of Rock and Roll” explores one of the most influential artistic movements of the 20th century. These are the objects that made the music possible. “With its outstanding collection and comprehensive Department of Musical Instruments, The Met has for decades exhibited, celebrated and contextualized the global artistic vision and extraordinary craftsmanship involved in developing musical instruments,” said Max Hollein, director of The Met. “‘Play It Loud’ celebrates a formative chapter in 20th century art and culture, and the extraordinary objects featured in this presentation convey the innovation, experimentation, passion and rebellion at the heart of rock and roll. The exhibition allows us to appreciate the artistry of the instruments as well as their powerful role in the creation and expression of rock’s legendary sound and identity.”

“Play It Loud” is displayed thematically. It shows how musicians embraced and advanced to emerging technologies. Going through the 1960s, the phenomenon of the “guitar gods ”came to life. There was the crafting of a visual identity through the use of instruments. At some live shows, audiences experienced the destruction of instruments, one of rock’s most defining gestures. The exhibition includes many of rock’s most celebrated instruments, including such guitars as Jimi Hendrix’s electric guitar, named “Love Drops,” that was originally decorated by Hendrix.

By displaying several rigs used in live performances and sound recordings, the exhibition also demonstrates how artists created their own individual sounds. There are some 40 vintage posters, costumes and performance videos.

Jayson Kerr Dobney, Frederick P. Rose curator in charge of the Department of Musical Instruments, commented, “Instruments are some of the most personal objects connected to musicians, but as audience members we are primarily used to seeing them from far away, up on a stage in performance. This exhibition provides a rare opportunity to examine some of rock and roll’s most iconic objects up close. “

Other show hits included Lady Gaga’s custom-designed piano that was used in her performance of “ARTPOP” on “The Tonight Show with Jimmy Fallon” in 2014. Keith Richards’ guitar is known to have been used when the Rolling Stones appeared on “The Ed Sullivan Show” in 1966. Later, it was hand-painted by Richards.