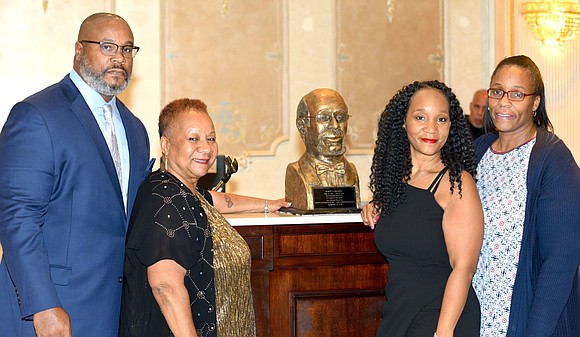 The Sports Foundation, which has positively impacted the lives of countless New York City youth who have gone on to pay it forward as adults in numerous walks of life, held its 50th anniversary gala titled “Celebrating Our Angels” Thursday, Sept. 19, at the Villa Barone Manor in the Bronx.

Williams, fondly known as Bob, was a founder and member emeritus of the Sports Foundation. A star basketball player for Roosevelt High School in the Bronx and NYU, he passed away last year but his impact on the organization is indelible. Williams’s surviving family, which includes his widow Milda Williams, was presented with a bust in his likeness.

Ramsey, a New York City basketball legend, died of cardiac arrest at Riverside Premier Rehabilitation and Healing Center in Manhattan last March after a long illness.The Harlem native was a beloved and longtime employee of the New York Knicks, which in 2010 presented him with the Dick McGuire Knickerbocker Legacy Award.

Meminger, who passed away in 2013, was one of the best high school players in New York while attending Rice in Harlem in the 1960s. He went on to become a standout at Marquette University before returning home to play for the Knicks, earning a championship ring with the team in 1973. Hall of Famer Earl Monroe accepted the awards in the names of Ramsey and Meminger.

A Chicago native, Young was one of the first African Americans to play professional football. A shade under 5’5”, in 1947 the dynamic halfback and former University of Illinois track star was drafted by the New York Yankees of the All-America Football Conference, whom he played for until 1949. In 1950, Young became a member of the New York Yanks of the National Football League when the AAFC folded. Born in 1926, Young died in a car accident in 1983 in Texas. At the time, he was the director of player relations for the NFL.

Steinbrenner was one of the most successful owners in Major League Baseball history, purchasing the New York Yankees in 1973. Under his ownership, the Yankees won seven of the franchise’s MLB record 27 World Series titles. Steinbrenner was a generous supporter of the Sports Foundation before passing away in 2010.