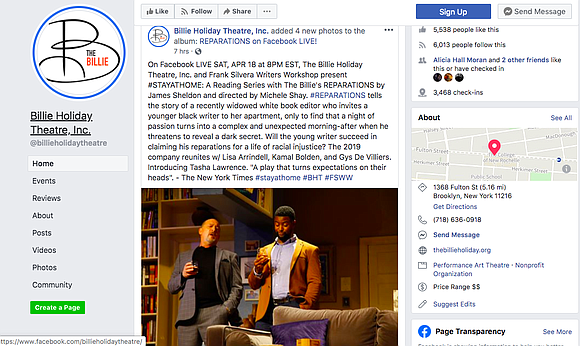 If ever there was a creative, rich source for theater in Brooklyn, it has been the Billie Holiday Theatre in Restoration Plaza. For the decades it was under the extraordinarily capable leadership of Marjorie Moon and has since been taken over by the very well-equipped Dr. Indira Etwaroo as its Executive Director. Dr. Etwaroo completely realizes the importance of theater in the Black community and, during this coronavirus pandemic, has found a marvelous way to entertain and inspire families in the comfort and safety of their homes. In a partnership with the Frank Silvera Writer’s Workshop, the theater launched a reading series called the #StayAtHome Reading Series, an online play reading series bringing together writers, directors and actors from across the country from within their own homes via Zoom.

The series began in March and thus far has shown readings of Richard Wesley’s “Autumn” directed by Walter Dallas and “50in50: Letters to Our Sons” with 11 Black women actors and 50 Black women writers from across the globe. This Saturday, April 18 at 8pm, visit www.facebook.com/billieholidaytheatre to experience a reading of James Sheldon’s “Reparations,” directed by Michele Shay, which premiered at The Billie Holiday Theatre last November.

I had the incredible experience of seeing “Reparations” and I can tell you that this work is very powerful. The actors are exceptional. For this online reading of the work, a majority of the show’s original cast will reunite including Broadway and film stars Lisa Arrindell (“Cat on a Hot Tin Roof” on Broadway, “A Lesson Before Dying,” “Madea’s Family Reunion”) in the role of Millie, Kamal Bolden (“The Resident,” “Chicago Fire,” “Rosewood”) in the role of Reg, and Gys de Villiers (“Mandela: Long Walk to Freedom,” “Vehicle 19,” “It Gets Better”) in the role of Alistair. Tasha Lawrence (“Pipeline,” “Hangnail”) will join the cast in the role of Ginny.

“Reparations” tells the story of a recently widowed white book editor (Lawrence) who invites a younger black writer (Bolden) to her apartment, only to find that a night of tenderness and passion turns into a tumultuous morning-after when he threatens to reveal a dark secret from her past. As family friends – played by Arrindell and de Villiers - join them for an Upper East Side lunch, we discover whether the young writer will succeed in claiming his “reparations” for a life of racial injustice and personal betrayal.

“Throughout history, the arts have been mankind’s answer in times of unthinkable struggle, hardship, and chaos,” said Dr. Etwaroo. “This will be no different, as we present artists and stories online, and I am hopeful that we as a global community will emerge stronger, more resilient, and more united than ever before.”

Additionally, The Billie has migrated classes for its Black Arts Institute, a partnership with Stella Adler Studio of Acting and NYU, as well as its Youth Arts Academy (YAA) to remote learning. Students will connect with each other and faculty through Zoom and will maintain their normal class schedule to include Voice and Dialect, Movement Dance and Studio Rehearsal. YAA has moved to distance learning utilizing weekly classes presented asynchronously by the faculty on Vimeo.

Please make plans to watch “Reparations” and let your family and loved ones experience some incredible theater. (Just be warned: the subject matter is for a mature audience.)