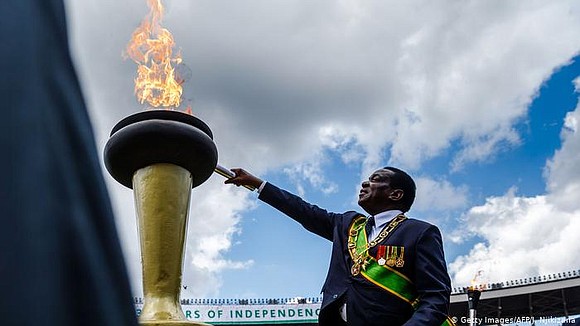 On April 18, 1980, the people of Zimbabwe declared their independence from British colonizers after many years of armed struggle. Their struggle to maintain their independence continues today. Africans on the continent and in the diaspora look to Zimbabwe for its leadership and fearlessness in our collective struggle for self-determination and development.

President Emmerson Mnangagwa, a former combatant and guerilla commander in Zimbabwe’s war for independence, made a nationally televised 40th anniversary address acknowledging the impact of the coronavirus pandemic in Zimbabwe, which has been limited to 24 cases and three deaths. The long planned 40th anniversary celebrations throughout the country have been postponed at this time.

“We celebrate our milestone 40th Independence Anniversary in the context of unprecedented times, that of the threat brought about by the COVID-19 pandemic. I would like to once again thank the nation for the collective response to our appeal towards our preparedness to fight the pandemic within our jurisdiction. I further commend the nation as a whole for the manner we have carried ourselves during this national lockdown. Although we are physically separated, we are united in spirit. The time to celebrate together shall come,” said Pres. Mnangagwa.

Pres. Mnangagwa also addressed the impact of sanctions on Zimbabwe: “Our situation is compounded by the continuing illegal economic sanctions, which we have endured for close to half of our years of independence. These sanctions have limited our options and constricted our possibilities of freely interacting in the global economy.

“I thank the European Union for softening its stance towards us. I implore Washington to promptly lift these illegal sanctions against us without any preconditions. They are illegal and hurtful to our people; Zimbabwe does not deserve them.”

Zimbabwe is still on the revolutionary path to consolidate land, resources, and development against all odds. Mnangagwa pointed out the importance of the land issue: “Our Land Reform Program remains a fundamental cog to our independence and sovereignty. The land shall forever remain united with the people, and the people to their land. To this, there is no wavering or going back.”

The December 12th Movement and the Friends of Zimbabwe have led the U.S. Hands off Zimbabwe actions and campaigns to lift the illegal sanctions for decades nationally and internationally. D12 spokesman Frank Brown stated, “We work in Pan-African solidarity to lift the U.S. sanctions on Zimbabwe because sanctions kill. They are lethal weapons used to destabilize and exploit nations. We want people to contact their congressional representatives and the Congressional Black Caucus and demand an end the illegal U.S. economic sanctions.”