The Giants fortify their O-line by drafting Georgia’s Thomas 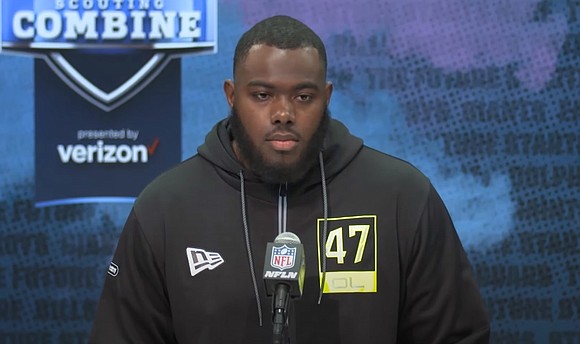 Clemson do-it-all safety/linebacker Isaiah Simmons may evolve into a Pro Bowl and All-Pro player in the not too distant future. He was an enticing option for the Giants last Thursday when they were on the clock with the No. 4 overall pick during last Thursday’s first-ever remote NFL Draft.

However, shoring up their offensive line in front of quarterback Daniel Jones and running back Saquon Barkley was more of a priority for the Giants than adding the dynamic Simmons. So general manager Dave Gettleman and the team’s brain trust decided on selecting University of Georgia offensive tackle Andrew Thomas with their first round pick.

Thomas was the consensus top tackle prospect among pro scouts and college evaluators entering this past collegiate season. Yet several more players emerged as the schedule progressed, notably Louisville’s Mekhi Becton, Iowa’s Tristian Wirfs and Alabama’s Jedrick Wills Jr., as the tackle most likely to be drafted first among them. But it was Thomas who the Giants deemed to be the best fit for their rebuilding process.

“We spoke to him in Indianapolis (at the NFL Scouting Combine in February) and we just feel he is ready to make this jump. He’s young, like all these guys are. We feel very strongly that he is ready and capable.” Gettleman believes the 6-5, 315 pound Thomas has all the measurables and intangibles to become an outstanding tackle at the pro level.

“He’s big, he’s long, he’s strong, he can bend. He can anchor in pass [protection],” added Gettleman. “He’s very athletic in the open field, we are just really excited to have him, and continue to build this team properly.”

Giants first-year head coach Joe Judge echoed Gettleman’s assessment of Thomas. “This was a very talented draft class, especially on the offensive line,” said Judge. “This is definitely one that we think is going to give us a chance to come in and improve us overall.

“He has a skillset that gives him a chance to come in and compete early on. We are anxious to get to work with him, get our hands on him and get going. He has the right demeanor, the right makeup.”

All of the aforementioned tackles were taken in Round 1 once Thomas went off the board. Wills went to the Cleveland Browns at No. 10, Becton was selected by the Jets with the 11th pick and Wirfs was secured by the Tampa Bay Buccaneers at No. 13 to help safeguard their new quarterback Tom Brady. Simmons was scooped up by the Arizona Cardinals at No. 7.

Although the Giants prioritized their offensive line over their defense––which allowed an average of 28.2 points per game last season, third worst in the league––in drafting Thomas over Simmons, they did acquire arguably the best safety in the draft when they picked Alabama’s Xavier McKinney with the fourth pick in the 2nd round (36th overall). The 6-0, 200 pound, multi-skilled McKinney has the potential to become one of the NFL’s best players at his position.