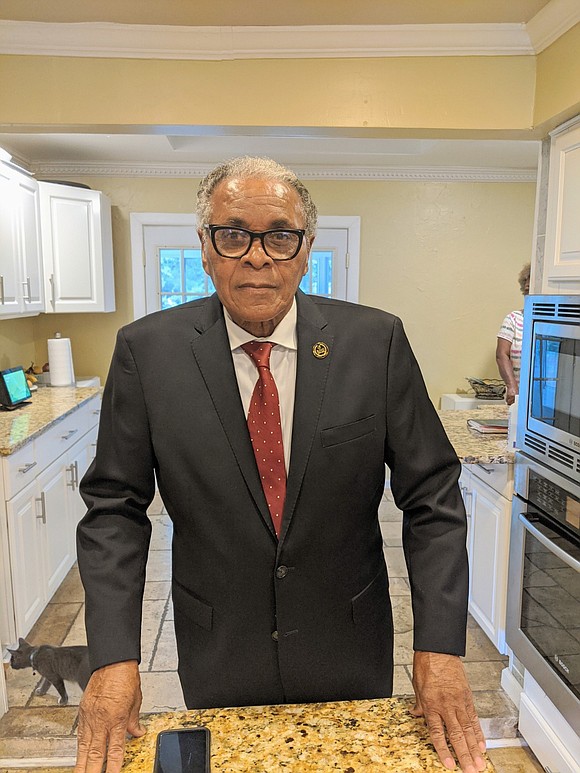 After making T-shirts for his family reunion, his niece gave him the idea of making shirts for political issues he cared about. Atkins already had experience making shirts when he was a road manager for musical groups like The Ebonies and The O’Jays.

“It’s what all of us have to ask ourselves: ‘What can I do as a citizen?’”Atkins said. “Making T-shirts that captivated the audience was my calling and contribution to society.”

Since it is an election year, Atkins makes timely shirts that encourage people to vote and participate in elections on the local, state and federal levels. He believes that it’s important for communities of color to vote for officials that share their values.

“We need to be a part of the campaign to make sure that our interests are represented,” Atkins said. “It helps to have someone in the room when decisions are being made.”

Longtime friend of 50 years Charles Raikes said that Atkins taught him how to be an entrepreneur, since he maintained a successful truck business while simultaneously selling shirts.

Raikes said that Atkins served as a positive image to the young men in the community. He mentioned that Atkins was politically active for a long time, but now his ideas have expanded from how he can help the community to the world.

“He’s always been civic-minded, but more recently, he’s been more conscious of our people, not just as a community but as a nation,” Raikes said. “He’s concerned about what he can do for his people as a nation, in terms of economic development, being able to sit at the table and make policy.”

Atkins’ daughter, Crystale Fleming, agrees with Raikes that her father has had a long history of being active within the community. Fleming remembers an instance where he organized a free concert event inviting local churches that recognized long standing church members and gave them appreciation for their service.

“He’s always looking for ways to bring the community together,” Fleming said. “When he’s making shirts, he is pleased that his vision has been brought to the forefront.”

When asked about how communities of color can continue the momentum for the rights or principles they want, Atkins again asserts the importance of voting.

”We have to go to school board meetings,” Atkins said. “We have to vote in part to see our decisions being implemented. Change does not come overnight.”