Viola Davis, Stacey Abrams on the importance of the Census: 'Our Voices, Our Votes, Our Time' 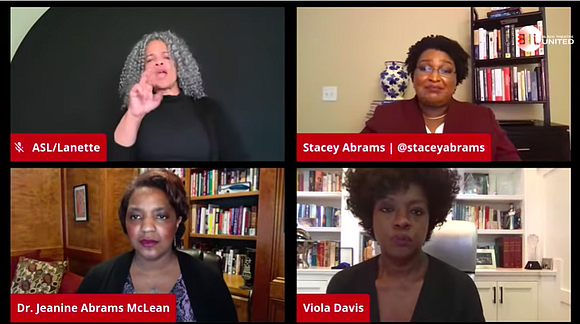 Everyone is constantly being asked to fill out the census. Some people have done it already and some have not. Some people don't fill out the census because of their immigration status or other concerns that their information will be shared with others. But 2020 is that 10th year mark when the census needs to be filled out so that communities can have a voice and get funding for schools, roads, and all types of services that they desperately need. Communities of color tend to be hesitant about filling out the census and that is why Black Theatre United held a virtual Town Hall, "Our Voices. Our Votes. Our Time" with award-winning actress Viola Davis as the moderator and featuring an in-depth discussion between Stacey Abrams, who ran for Governor in Georgia and is also the founder of Fair Fight 2020, which seeks to fund and train for voter protection, and Fair Count which seeks to encourage census participation; and Dr. Jeanine Abrams McLean, the Vice President of Fair Count and Abrams' younger sister.

The Town Hall started out with a tribute to the late John Lewis by Tony Award winning and Black Theatre United member, Vanessa Williams. Williams then introduced Stacey Abrams and explained that she launched Fair Count to assist with the Census. Williams also introduced Dr. Jeanine Abrams McLean and Davis, the evening's moderator.

In an attempt, to address peoples' misconceptions about participating in the Census ,Davis began the Town Hall stating that people have a basic mistrust of the census. She asked about the value of the census was and its importance. Stacey Abrams gave the audience some background. "The census was originally designed to count slaves. Black people only counted as 3/5 of a person. The 18th amendment abolished the 3/5th. We're using the census to distribute funds every 10 years. If you have 5,000 in one state and 50 million in another you will give appropriate funding. The census helps us allocate money, resources for federal programs-it pays for school lunches, PELL Grants, bridges, etc.. You get a portion of power based on the number of people…Every 10 years you and me count." Reflecting on people's concerns about their personal information, Abrams remarked, "If you have a cellphone bill or utility bill they already know where to find you. They try to scare us about the census. In the last census, people didn't fill it out and now they're not getting funded."

Dr. Jeanine Abrams McLean chimed in, "In the 2010 census white homeowners were overcounted and Black and Brown children were undercounted. If that happens now, then my son's school can be overcrowded."

Davis asked about the issue of undocumented communities being afraid of outing family members. She asked if filling out the census is safe, especially at a time when families are being ripped apart.

Dr. Abrams McLean replied, "The census data is safe. Census workers take lifelong oaths not to share your information under penalty of jail time and a $250,000 fine. If you put someone on the census the government isn't going to come and get them. Undocumented people-we want to make sure that Spanish and Black immigrants are part of the census. Trump signed a memorandum to keep undocumented people out of the census. It's illegal. Don't let them scare you out of it."

At a time when voter suppression is a definite issue, Davis asked about Jim Crow being alive and well. Abrams replied, "The constitution does grant us the right to vote, but the ability to vote is up to the states. If you're in states like Georgia and Texas there is an effort to get you not to vote through the long lines…Voter suppression exists every day! The systems effect young people, people of color and poor people. Suppression is when we don't have the right to get our voices heard."

Davis, talking about the issue people face growing up in poverty and explaining that she grew up that way, asked what do you do for people who have given up? Abrams explained that she and her siblings also grew up in poverty. "Our parents taught us we were not limited." Discussing voting she stated, "ask people if they are registered to vote, if not, ask them why and speak to them for the ancestors." Dr. Abrams McLean shared, "Poverty leads to a sense of powerlessness. We're trying to build power in our communities. We want people to say, 'I am here, see me today!' The first step to lift you up is to see you're seen and counted in the community."

As the nation is gripped with this pandemic, Davis asked what message of hope can be shared. Dr. Abrams McLean said, "We are in the midst of two pandemics-COVID-19 and systemic racism. Out of these two pandemics we'll get a vaccine. By talking about systemic racism and you have messengers like you (Davis), like Black Theatre United and Stacey that's what's going to get us through this."

The deadline for the census has been extended until September 30, 2020. Individuals can go to www.my2020census.gov and fill it out.

Encouraging everyone to not only fill out the census, but advocate for others to do so as well, Dr. Abrams McLean recommended people go to www.blackmencount.org and www.blackmencount.org. At www.faircount.org there are initiatives like Black America Counts, and they also map out every state and county and tell people what funds they will lose if they don't participate in the census. You can experience this important Town Hall by visiting www.blacktheatreunited.com. Follow Black Theatre United at twitter.com/BLKTheatreUnite , , www.facebook.com/BlackTheatreUnited/ and info.www.instagram.com/blacktheatreunited for more info.